The 2019 CPL got underway with the defending champions beating the Patriots.

Starring for Knight Riders were newly appointed captain Kieron Pollard and New Zealand allrounder Jimmy Neesham, who scored 47 and 33 respectively. Neesham also took three wickets, including two in the last over of the match.

Neesham then snapped an opening stand of 47 from the Patriots and held a catch that trigged a collapse of four wickets for six runs. Defending 13 runs off the last over of the match, Neesham took two wickets with a pair of low full-tosses honing in on the stumps.

Well placed at 70/1 in pursuit of 153, the Patriots slipped to 76/5 in the span of three overs as Khary Pierre and Seekkuge Prasanna stunned the middle order. Evin Lewis (36) was caught by Neesham off Pierre, Jason Mohammed was dismissed for 0 by Prasanna, Devon Thomas for 1 by Pierre and Carlos Brathwaite was run out for 2.

A brief scare came from Fabian Allen who struck Prasanna for four sixes in the spinner’s third over over, after the Sri Lankan had conceded just three runs from his first two. Mohammad Hasnain helped pull things back with three wickets, dismissing Allen, Mohammad Hafeez and Rayad Emrit.

Usama Mir hit 24 from 10 balls in what proved the final charge in Patriot’s chase, before Neesham bowled a fine last over to win the game for TKR.

Earlier, Sheldon Cottrell bowled fantastically for figures of 3/13 from his four overs. Cottrell pulled out his trademark salute in the CPL’s first over when he bowled Sunil Narine, and later added Tion Webster and Ramdin to cap a fine outing with the ball. For Patriots, Emrit also claimed three wickets. 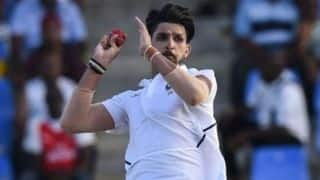 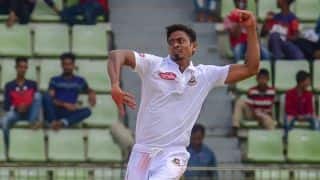