Shai Hope and Raymon Reifer were the main architects of Barbados Tridents first win of the 2018 Caribbean Premier League (CPL), each player turning in a career-best T20 effort as the franchise got its campaign off on a winning note.

Chasing 186, table-toppers Guyana Amazon Warriors came up 30 runs short for their first loss of the tournament.

Banned former Australia skipper Steve Smith also contributed to Tridents win on CPL debut, scoring a fluent 41 before he was given out lbw – a decision he hardly waited for before walking off with his team well placed at 116/3 in 13.1 overs.

Hope s 88 off 45 balls featured six sixes and as many fours, and was the only fifty of the match. It came after Tridents had lost their openers with 11 runs on the board. Along with Smith (41 off 37 balls) and Nicholos Pooran (45* off 27), this got Tridents to 185/4 in 20 overs, which proved plenty as Reifer grabbed five wickets for the first time in T20s.

Jason Holder began the proceedings with the wicket of Chadwick Walton in the second over, and from there it on it was Reifer s show. The seam bowler began by taking out Luke Ronchi and Shimron Hetmeyer off successive deliveries, and then returned to bowl at the death. Three wickets ensued in the 19th over: Chris Green, Jason Mohammed and Sherfane Rutherford. With this huge over from Reifer, Guyana s chase petered out. 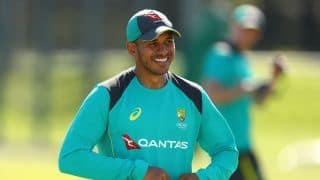