Ontong referred to CPLT20 as a mini world cup.

“I think the IPL teams are one of the favourites to win the competition. All the other teams have equally good players and have an equally good chance. If they can just combine well as a team then it would be great,” Ontong told PTI in an exclusive chat from South Africa.

“We see this event as very important to us. We refer to it as the mini World Cup. That’s how we see it. It’s a great platform for players. Some players who haven’t played on the international front get a chance to rub shoulders with the world’s best. Obviously there is a big financial benefit attached to it. But our focus is on playing well and if we can pull it off then nothing like it,” he added.

The runners-up in the current domestic T20 championship were the semi-finalists in the 2009 inaugural event but could not make it to the final-four in 2011. Ontong, who was part of both the outings under then skipper Justin Kemp, said that this time around Cobras have a realistic chance.

“I think we have got a very good chance. All the teams have a very good side. There is some good talent on show. Some big names playing. We have some very good players in our team. If we could combine well as a team then we can surely perform good,” he said.

Despite veteran all-rounder Jacques Kallis‘s decision to represent reigning IPL champions Kolkata Knight Riders instead of Cobras in the Oppo-sponsored event, the Proteas outfit has many a big name in the squad. South Africa Test captain Hashim Amla, who made his debut in the Kolkata Test in 2004, which was Ontong’s second and his last till now, is the team’s star player and the 34-year-old skipper is keen to bank on his experience.

“We have got some experienced players in the squad. Players like Hashim, who has played all over the world and a lot in the sub-continent. So we are going to rely on his experience. Even Robin Peterson adds to the team. We have a gameplan and if we could execute it well then we will be certainly worth the money,” he said.

“It makes the captain’s job much easier to have so many stars around. They bring with them a bagful of experience. Especially Hashim is a big bloke for us and we hope that we fire as a team,” he added.

With former Proteas chinaman bowler Paul Adams as coach, Cobras are banking on team effort and Ontong also opined that T20 is not just a captain’s game.

“I believe T20 is a team game. And everybody contributes. Captains, coaches, players, all have a role to play. Sometimes I am on the boundary and rely on my senior players to guide the bowlers. Especially in India the crowd noise is deafening and it’s difficult to get your message across. So it’s a team effort I believe,” he said. Having a fair bit of experience of Indian tracks, Ontong said that spinners will play a crucial part in the upcoming tournament.

“Generally the Indian pitches are on the slower side as compared to the bouncy South African tracks. But nowadays even the Indian wickets have started having bounce. Though they are still slower in nature and spinners will certainly come into effect,” opined Ontong.

After having represented the national team in two Tests, 28 ODIs and 12 T20 Internationale’s, Ontong, who made his ODI debut in 2001, still harbours an ambition to play again in South African colours. “My dream is still to represent South Africa. And the dream is still alive. you never know, a good tournament and you are back in the reckoning. Also from the team point of view, I want to continue contributing for Cobras,” Ontong signed off. 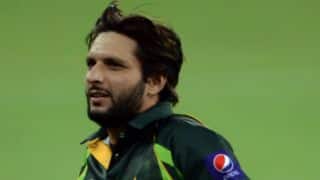