Kieswetter's vision was never the same since the horrific injury in July 2014.

England wicketkeeper batsman Craig Kieswetter announced his retirement from all forms of cricket on Friday. Kieswetter, who played for Somerset in the County Championship, has been suffering the consequences of an eye injury that he sustained during a County match against Northamptonshire in July 2014. READ: Craig Kieswetter suffers nasty eye injury

Kieswetter was immediately hospitalised following the injury, in which the ball went through his helmet grille and went on to smash his nose along with his eye socket. He also sustained injuries to his cheekbone in the process.

The South Africa-born player underwent facial surgery and even played for Somerset, along with South African domestic side Warriors, for some time. But his vision was not the same as in the past, and the 27-year-old felt that he was not the same batsman as he was in the past. Kieswetter was named in England’s preliminary squad for the ICC Cricket World Cup 2015, but was forced to be replaced due to problems arising from the injury. READ: Craig Kieswetter forced to miss 2015 World Cup due to eye injury

Probably the hardest decision I’ve had to make but one that is definitely the right move forward. pic.twitter.com/lDtxQ6PA0L

Kieswetter posted a note on his official Twitter account on Friday, in which he thanked his family, all his supporters as well as Somerset Cricket Club. He also mentioned his thoughts over his decision to quit at such an early age [at the age of 27]. READ: Craig Kieswetter undergoes operation after injury

“After been given the opportunity to take some time off and step away from the game I’ve come to a decision that wasn’t the easiest to make, yet I feel is the right one,” Kieswetter was quoted as mentioning in his note.

“Having gone through the traumatic experience of my eye injury and everything it entailed, I feel mentally I will never be the player I was. As a person/player I’m not comfortable continuing if I can’t give my 100 per cent.

“There are so many people I’m grateful to yet most importantly I need to thank my family, without who nothing I achieved would have been possible. I’d also like to thank Somerset Cricket for giving me the opportunity to play as a professional,” added Kieswetter.

Kieswetter represented England in 46 One-Day Internationals (ODI) and 25 Twenty20 Internationals (T20I), making his ODI debut against Bangladesh in February 2010. He averaged 30.11 in ODIs, scoring a century and five fifties in the format.

Kieswetter, however, will be best remembered for the ICC World Twenty20 in 2010, in which he played a match-winning 63 in the final against Australia to lead England to their first-ever victory in an ICC event. 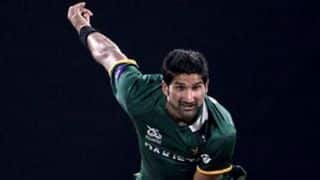 Sohail Tanvir: Looking forward to playing in the CPL 2015