John Harnden was the CEO of the ICC Cricket World Cup 2015.

John Harnden has joined the board of directors of Cricket Australia. Harnden filled the gap left by John Bannon, who left for heavenly abode in December last year. This was declared in a release yesterday. Harnden had held the post of CEO of the 2015 Cricket World Cup. He was also the CEO of Melbourne Commonwealth Games. For this he received an Order of Australia award around nine years ago. This was in recognition to the services he has rendered in the past. From 2010 to 2012 he was the CEO of South Australian Cricket Association. FULL CRICKET SCORECARD: Sunrisers Hyderabad (SRH) vs Kolkata Knight Riders (KKR), IPL 2016 Match 8 at Hyderabad

Cricket Australia’s chairman on the appointment David Peever was quoted by Cricbuzz saying, “We are delighted to welcome one of Australia’s elite sporting administrators to the Cricket Australia Board. John brings a large amount of depth and experience to the role, and is no stranger to cricket having successfully led the ICC Cricket World Cup in 2015, which was jointly hosted by Australia and New Zealand. Aside from his outstanding business credentials and experience, John has a genuine passion to grow the game and his valuable knowledge will contribute enormously as we seek to realise our vision of being Australia’s favourite sport and a sport for all Australians,” he added. READ: Cricket Australia board director John Bannon passes away aged 72 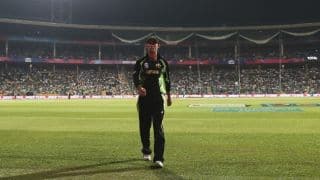