Iceland pulled off one of the most astonishing results in the history of European football on Monday knocking England out of the Euro 2016 finals.

In the Round of 16 of Euro 2016 match between England and Iceland the results were shocking to enough to break through social media. Twitter has been a place to express various opinions and this time cricketers were amazed on England being eliminated as Iceland took the lead by 1-2. This immediately forced Roy Hodgson to resign as England manager. Cricketers across the globe be it Harsha Bhogle, Michael Vaughan, Tino Best, Damien Martyn and Herschelle Gibbs were surprised and amazed to find one of the best teams to find their way out too soon. This has given opportunity to Iceland to play against France in the quarter-final. ALSO READ: Kohli thanks Kroos for special gift; sends out best wishes

Just waking up to the news, not the surprise, of England going out of a football tournament. #EURO2016

That was a Choke by our Football team….. Just didn’t handle the pressure and froze …. #HateToSayIt

This is not the first time cricketers are showing interest on football. When Portugal played against Croatia a rather elated and excited Chris Gayle put up a video cheering for Christiano Ronaldo for striking the goal during extra time. That’s not it, he even posed a picture outside Old Trafford Stadium, Manchester to show his support for his favorite league team. Just ahead of the Euro 2016, Virat Kohli showed his support for his favorite team Germany when he posed for a picture with the jersey.

Iceland pulled off one of the most astonishing results in the history of European football on Monday, knocking England out of the Euro 2016 finals. Playing at its first major international tournament, Iceland came from behind to win 2-1 in Nice. This victory, without doubt the most important in the country’s history, not only inflicted humiliation on England but also underlined Iceland’s reputation as a growing force in world football. 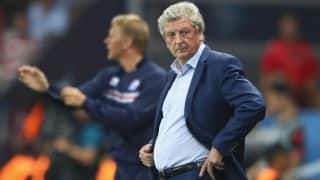 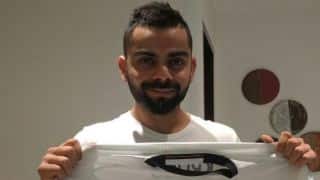