With four international cricket stars from Agra, the appointment of Dhruv Jurel as the captain of India U-19 has brought cheers to the city’s cricket lovers.

With four international cricket stars from Agra, the appointment of Dhruv Jurel as the captain of India U-19 has brought cheers to the city’s cricket lovers. The BCCI on Monday announced that Dhruv will lead the Indian U-19 cricket team in Youth Asia Cup in Sri Lanka, set to be held from September 3 to 15. READ: Dhruv Jurel to lead India Under-19s in Sri Lanka

Two women cricketers, Deepti Sharma and Poonam Yadav – who are both from Agra – have brought laurels to the country with their performances. Recently, the Chahar brothers – Deepak and Rahul – joined the Indian cricket team for the West Indies tour.

Dhruv’s coach Parvendra Yadav joined the celebrations at the Jurel house on Monday evening. Dhruv is currently in England. As a wicketkeeper-batsman, Dhruv’s record has been fairly impressive, piling up 1,010 runs from 22 innings and 55 catches behind the stumps.

Anubhav Gupta, a senior teacher at St Peter’s College, wondered how Agra has been producing national and international stars not only in cricket but also shooting, athletics, and other streams without proper facilities and ideal conditions.

“Right now we are having the national tug of war competitions in Agra, with women’s teams from various states putting up impressive performances,” he said.

Demands are regularly being made for an international stadium in Agra. Agra’s leading sportsperson, Formula car racer Harvijay Bahia, talking to IANS, said: “We have a vast pool of talented sports resources, but not committed and professional managers. In recent years, there has been a proliferation of cricket academies, boxing associations, and our schools are promoting sports in a big way. And remember, those who are passionate and talented, will anyhow find ways and means to forge ahead.”

Agra’s Eklavya stadium, located in the Cantonment area, has been attracting hundreds of sports enthusiasts.

“Coaches are available in various disciplines and now regular tournaments are being held, which allow talented young people to shine and be counted,” said Anita Yadav, a sports person from police department, who has won scores of medals at international athletic meets. 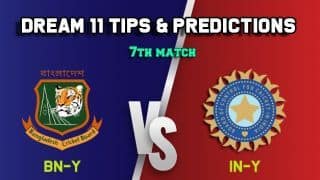 Dream11 Team Bangladesh U19 vs India U19, Match 7, U-19 Tri-series– Cricket Prediction Tips For Today’s match BN-Y vs IN-Y at Billericay