Clive Rice was one of the greatest cricketers of his era.

Johannesburg: Cricket South Africa (CSA) today paid tribute to Clive Rice, the first Proteas captain after the country was readmitted to the international arena, by flying the national flag at its headquarters here at half-mast. Rice, who had been suffering from a brain tumour, played most of his cricket during South Africa’s 20-year isolation from international cricket. Rice succumbed following a long battle five days after his 66th birthday. “Clive was our first captain and we knew him to be a great fighter all his life,” said CSA Chief Executive Haroon Lorgat. READ: Former South Africa captain Clive Rice passes away

“Even during his last few years he put up a typically courageous and inspirational fight against the illness that had threatened him for a lengthy period of time. Clive will always be remembered for captaining the Proteas on our historic first tour to India in 1991 and, as one of the great all-rounders and captains of the game, it was fitting that he got the chance to play international cricket even though he was at an age when most players might have called time on their careers.” READ: Clive Rice passes away: How the cricket world reacted

Rice’s best playing days coincided almost identically with South Africa’s isolation from international cricket because of apartheid, which divided the sport on racial lines in the country. He was selected for the cancelled tour to Australia in 1971-72 at the age of 22 and was 42 when he led his country to India on the ‘Friendship Tour’ as democracy dawned with the release of Nelson Mandela from prison. READ: Kevin Pietersen remembers Clive Rice in emotional tweet

After his retirement from the game Rice became the first director of CSA’s National Academy before he travelled overseas to become director of cricket for Nottinghamshire County Cricket Club where he previously had a stellar career as a player. As their captain he led them to the county championship in 1981 for the first time since 1929 and formed an internationally respected new ball partnership with Sir Richard Hadlee of New Zealand. READ: Clive Rice: How he compared against Imran Khan, Ian Botham, Kapil Dev, and Richard Hadlee

During his career he made more than 39 000 runs in first-class and limited overs cricket and took more than 1,500 wickets. As a mark of respect the Proteas will wear black armbands in the Test match against Bangladesh starting Thursday. Rice had also received treatment for his ailment in India a few months ago after doctors here said there was nothing further they could do for him. Rice was full of praise for the Indian medical specialists. READ: Lamb caught Kourie bowled Rice: The dismissal that was a meal Ashes 2015: England look to bounce back after an dismal outing at Lord's 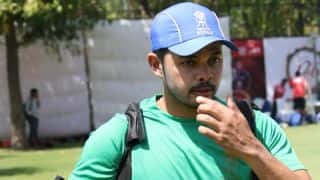 Sreesanth to approach BCCI to lift ban on him