Here s a chronological lowdown of all that has happened in those six matches played between India and Pakistan at the World Cup.

India–Pakistan matches have always triggered wild emotions when the arch-rivals meet in any competition. However, Sunday s ICC World Cup 2019 clash, pitted to be the most revenue-generating match at the global showpiece event this year, will be followed even more closely particularly due to the furore that was caused in the aftermath of the Pulwama attacks in India s Jammu and Kashmir region.

Both sides last met in the 2018 Asia Cup in September at Dubai where the Rohit Sharma-led side pulled off a crushing nine-wicket win even without regular captain Virat Kohli.

India and Pakistan have faced each other for a total of six times at the ICC World Cup, and India leads the head to head record 6-0. Pakistan has never been able to defeat India at the 50-over World Cup.

Here s a chronological lowdown of what happened in those six matches.

India beat Pakistan by 43 runs in their first World Cup match in 1992 at the Sydney Cricket Ground, but what grabbed eyeballs was Javed Miandad‘s mocking of Kiran More that became the iconic image of the rivalry between the arch-rivals. Batting first, Sachin Tendulkar‘s unbeaten 54 coupled with Kapil Dev‘s 26-ball 35 propelled India to 216/7 in 49 overs (an over was reduced to Pakistan’s slow over rate). Pakistan folded for 173 in 48.1 overs with Dev, Manoj Prabhakar and Javagal Srinath all pocketing two wickets apiece.

India once again asserted its dominance this time in the quarter-finals of the 1996 Wills World Cup on March 9 at Bangalore winning the clash by 39 runs. Batting first, India posted a total of 287 that came on the back of Navjot Singh Sidhu s brilliant 93. Venkatesh Prasad and Anil Kumble led from the front with three wickets each to restrict Pakistan to 248/9. This was India’s first win over Pakistan since the 1992 World Cup.

The stage was set at Old Trafford, Manchester in England for a fitting duel, but once again, the saga continued with India edging out Pakistan by 47 runs. This match was played against the backdrop of the Kargil war with India having no chance to qualify for the semis. Barring an initial flurry from Tendulkar, Indian batmen somehow never got going and managed to score 227/6 in 50 overs. However, Venkatesh Prasad bailed the team out with a sensational 5/27 as he single-handedly decimated the Pakistan batting line-up.

Pakistan and India were facing each other after a long gap of three years. Powered with a century at the top from Saeed Anwar, Pakistan notched up 273. India had no chance against the likes of Wasim Akram, Waqar Younis and Shoaib Akhtar. But Tendulkar proved them wrong! The batting maestro blazed his way to 98 to guide India to a comfortable 47-run victory.

This match was on the edge! India and Pakistan were facing each other in the semi-final of the 2011 World Cup 2011 at Mohali. Batting first, India posted 260 that came on the back of Tendulkar s 85. He earned a reprieve thrice thanks to some very slopping, if not shocking fielding from Pakistan. Inspired by Yuvraj Singh‘s (2/57) bowling performance, India won this match by 29 runs after Pakistan were skittled for 231 in the penultimate delivery of the innings.

This one witnessed a Virat Kohli special! Kohli returned to his sparkling best to help India continue their World Cup domination over arch-rivals Pakistan here yesterday, extending their winning streak to six with a crushing victory. The swashbuckling batsman ended a run of single-digit innings by scoring 107 off 126 balls and guiding his team to 300/7. In the process, he became the first Indian batsman to score a century against Pakistan in the World Cup, surpassing the 98 scored by Tendulkar scored at Centurion in 2003. In reply, Pakistan were bowled out for 224 in 47 overs with Mohammed Shami emerging as the pick of the bowlers with four for 35 in his 9 overs. 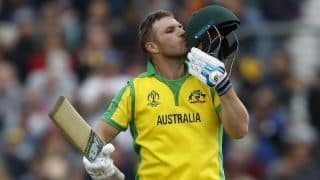 IND vs PAK, Match 22, Cricket World Cup 2019, LIVE streaming: Teams, time in IST and where to watch on TV and online in India