Sri Lanka have not played a match since June 4; Australia are without Marcus Stoinis.

LONDON: Australia meet Sri Lanka in match 20 of the ICC Cricket World Cup 2019 at Kennington Oval on Saturday, and the good news is that we are not discussing the English weather.

The forecast for London on the weekend is cheerfully positive, after a week of rain-hit matches, and this will be great news for the Sri Lankan cricket team in particular. They sat in Bristol for nearly ten days, watching it rain. They had practice sessions interrupted and two matches washed out without a ball bowled. Having not played a match since June 4, Sri Lanka resume cricket against a very solid Australian team who in their last game dispatched Pakistan.

Dimuth Karunaratne, Sri Lanka’s captain, understands full well the threat that a four-pronged Australian pace attack poses. Before the match, he spoke of the manner in which short balls have produced wickets in this World Cup, and herein lies a pivotal route to keeping Australia at bay: countering Mitchell Starc, Pat Cummins, Nathan Coulter-Nile and Kane Richardson.

How quickly Karunaratne’s team switches back to game mode will be critical, even though Aaron Finch is not taking their challenge lightly.

Australia, without Marcus Stoinis for a second game running, are upbeat. Finch smiled a lot during his pre-match press conference, during which he admitted he made one wrong call in Taunton, which was to send Glenn Maxwell ahead of Shaun and Usman Khawaja. With no other injury worries apart from Stoinis, Australia are looking the favourites for this match given they have not had a match hit by rain.

What: Australia vs Sri Lanka

Weather: Mostly cloudy with a high of 18 degrees Celsius.

The Australian team had a light training session at the ground on Friday, which began under the sun but moved inside as a light drizzle engulfed Kennington Oval. Stoinis was assessed by the team’s medical staff and then received throw-downs for about 25 minutes from Ricky Ponting and Sridharan Sriram, the bowling consultant.

Later, it was revealed by Finch that Stoinis is not going to play this match.

David Warner and Usman Khawaja did not train, but as Finch told reporters later, they rarely do a day before a game.

Australia will likely play the same team as against Pakistan, unless they decide to drop Kane Richardson to accommodate Adam Zampa who bowled for about half an hour at the indoor nets.

With Lasith Malinga back in England after flying home for the funeral of his mother-in-law, Sri Lanka can field a good bowling attack. Nuwan Pradeep resumed bowling on Thursday, and Sri Lanka are confident he can bowl in a live match. The concern is over his fielding, said Karunaratne, and a call will be taken before the match.

The strip for this match looked distinctly green, but as with so many matches at Kennington Oval over the past few years, that is no indication of a seaming surface come game day. Three matches here during this World Cup have seen teams batting first score well over 300.

Head to head in ODIs, Australia and Sri Lanka have played 96 times. Australia have won 60 of those matches, Sri Lanka 32. Four matches did not have a result.

In 16 ODIs at Kennington Oval, Australia have won eight and lost seven. One was a no-result.

Sri Lanka have played 12 ODIs here, of which they have won five and lost seven.

Cummins and Starc have taken nine wickets each in this World Cup.

Finch is the leading six-hitter of the tournament, with nine.

“You can never take any team in this competition lightly, but I think the fact that we’ve been playing consistently, basically every three days for the last two weeks, has been really positive that we’re in cricket mode at the moment.” – Finch

“I think if you take the whole World Cup matches, short balls are a serious matter. There are a lot of wickets, fast bowlers taking lot of wicket with the bouncers.” – Karunaratne 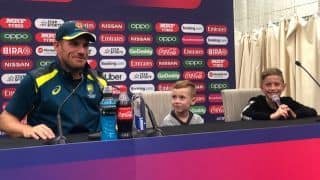