Australia to not have another seam-bowling allrounder in their World Cup squad.

LONDON: Marcus Stoinis will play no part in Australia‘s match against Sri Lanka at Kennington Oval on Saturday, the skipper Aaron Finch has confirmed, which indicates that the defending champions may have to play the same XI as the last game.

Stoinis is carrying a side strain which ruled him out of the last match with Pakistan in Taunton, where Finch bowled himself and Glenn Maxwell to make up overs. Australia do not have another seam-bowling allrounder in their squad of 15, but have flown in Mitchell Marsh as cover.

“He won’t be available again for tomorrow. He hasn’t bowled yet in his recovery over the last couple of days,” Finch told reporters at Kennington Oval on Friday. “So having four days between this game and the next game, I think that will be the ideal time to really test him out and assess him.

“But I think over the over the next five, six days, there will be a call made on that, just based on what he can and can’t do. We’ve seen him batting and running, no problem. Just he hasn’t tried to bowl yet. Just waiting for the injury to settle down a bit more.”

Marsh cannot play until Australia rule Stoinis out of the World Cup. They have four days from the time they play Sri Lanka and then Bangladesh, which gives Stoinis more time to recover.

The team management assessed Stoinis’ fitness at Kennington Oval on Friday, after which he received throw-downs from Ricky Ponting and spin consultant Sridharan Sriram at the indoor nets.

Ponting rates Stoinis highly and was heard repeatedly encouraging the allrounder when he batted in the nets, but the fact remains that he has not crossed 20 in his last six innings. 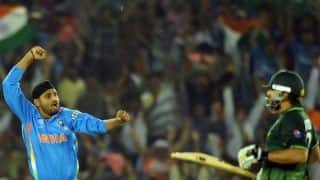 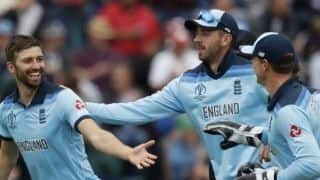