Bangladesh captain Mashrafe Mortaza has won the toss and chosen to field against West Indies in match 23 of the ICC World Cup.

TAUNTON: Bangladesh captain Mashrafe Mortaza has won the toss and chosen to field against West Indies in match 23 of the ICC Cricket World Cup 2019 at Taunton.

Both the team have made one change to their respective playing XIs. Bangladesh have dropped Mohammad Mithun, who bagged a duck in the last game, and replaced him with Liton Das.

West Indies have brought in an extra batter in Darren Bravo who takes the place of Carlos Brathwaite. Russell, who did not train at the County Ground on Sunday, has made the playing XI meaning the team management deems him fit enough.

Bangladesh had an injury concern in Mushfiqur Rahim who hurt his shoulder but Mortaza termed him totally fine after he underwent an x-ray and MRI scan. A few players have niggles, but as Mortaza said in Bristol and here in Taunton, that is something Bangladesh have been dealing with for a while.

Both teams have three points from four matches, one of which came from their respective washouts.

The pitch for today’s game looks a pretty good batting track. The two matches played here in this World Cup saw Australia bowl out Afghanistan for 172 and then cruise to victory in 32.1 over, and then post 307 against Pakistan and win by 41 runs.

Over the last two years, Bangladesh have a 7-2 record against West Indies in ODIs. Neither team has played a match in Taunton. 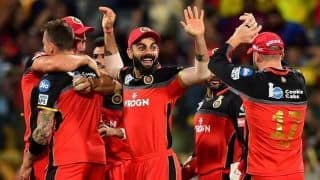