Liam Plunkett has warned Australia that England are a "different sort of animal" from their predecessors as they prepare for a blockbuster World Cup semi-final.

Liam Plunkett has warned Australia that England are a “different sort of animal” from their predecessors as they prepare for a blockbuster World Cup semi-final.

The Ashes rivals meet in Birmingham on Thursday with defending champions Australia hoping to stay on track for a sixth title while England aim to stay in the hunt for their first.

Australia have the edge in terms of tournament experience and have won the past four World Cup meetings between the teams — including a group match earlier in this tournament — but paceman Plunkett insists times have changed.

“They’ve been there and done it before but not against this bunch of players,” he said. ALSO READ: Justin Langer confirms Peter Handscomb s inclusion against England

“We’re a different sort of animal compared to our last teams. We’ve played well for the past four years, we’re ranked number one and we feel in a good place. We feel on our day we can beat anyone in the world.”

Plunkett is the elder statesman of the current England squad, making his international bow as far back as 2005 and earning his previous taste of World Cup cricket 12 years ago in the West Indies. ALSO READ: Cricket World Cup 2019: England in a good place ahead of Australia semi-final, feels Joe Root

He has witnessed the evolution of England’s one-day cricket and has never known a better mood in the camp.

“We had amazing players (previously) but I never thought we’d win a World Cup,” he said.

“We’ve made it exciting again. I’ve played in teams where we didn’t expect to win. With this squad the public expect us to win games and win series.

“It would be nice to finish this four-year cycle. This journey we’ve been on, with this group of boys, it comes down to this.”

The hosts slipped up three times in the group stage, suffering defeats to Pakistan, Sri Lanka and Australia.

One consistent factor in those losses was the absence of Plunkett, 34, who said the setbacks had only served to bolster England before their clash with the five-time winners.

And he said England had all the tools to deal with the expectation that comes from being the top-ranked side on home soil.

“People can thrive on it, people step out there and enjoy those moments. Other people have played under pressure, they’ve played in IPL (Indian Premier League) and competitions around the world,” he said.

“Australia is a game that gets the juices flowing. We’ve performed really well in the last two games.

“Even though we were dominant in those games, we feel like we’re stepping up a gear as well. We’re in a good place.” 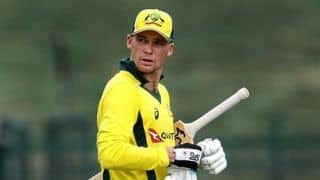