Cricket World Cup 2019, ENG vs NZ Final: Eoin Morgan always had the faith in me, from day one until now: A

Adil Rashid may have been struggling with a shoulder injury throughout England's run to the World Cup final, but the leg-spinner said he never once felt captain Eoin Morgan had lost faith in his ability.

Adil Rashid may have been struggling with a shoulder injury throughout England‘s run to the World Cup final, but the leg-spinner said he never once felt captain Eoin Morgan had lost faith in his ability.

Rashid has been one of the mainstays of England’s climb from 2015 World Cup also-rans to the top of the one-day international rankings and a place in Sunday’s showpiece match against New Zealand at Lord’s.

But with his shoulder problems seemingly preventing him from consistently bowling a sharply spun googly, one of his most dangerous deliveries, and tournament pitches not providing as much turn as expected, the 31-year-old was in danger of becoming a peripheral figure in the hosts’ World Cup campaign. ALSO READ: Current England team one of the best one-day teams I ve seen: Steve Waugh

But Rashid retained his place in the side and that faith was rewarded when he produced his best figures of the tournament, 3-54, in England’s eight-wicket thrashing of reigning champions Australia in Thursday’s semi-final at Edgbaston — a haul that included a googly which did for Marcus Stoinis. ALSO READ: No butterflies, says Jofra Archer as England gear up for Lord s final against New Zealand

“It was nice to make a batsman go for a cut on the back foot and spin it back in,” said Rashid. “That’s a nice feeling for any spinner that bowls a variation that a batsman doesn’t pick and gets a wicket.

“I’ve probably not bowled them as much and the main reason was probably because I’ve got a bit of a shoulder problem. ALSO READ: Kumar Dharmasena to officiate in final despite Jason Roy controversy during semifinal

“Before the shoulder, I was confident bowling everything but once you have a niggle it becomes a bit harder with the rotation — the arm gets a bit lower and you don’t find that snap.

“But I knew that was a big weapon for me… I knew I still had to bowl it even if I was in a bit of pain. Now I can get it back to my best.”

Morgan’s confidence never faltered, however, with the skipper pointing out after Thursday’s match that England had backed up Rashid in the field by not missing a chance off his bowling unlike in previous games.

“Morgs always had the faith in me, from day one until now. There are going to be games where you don’t go well and games where you go well but he was confident in me,” Rashid said.

“One hundred percent he’s the best captain I’ve played under. He knows my game now inside out and I’ve been with him for four years, through good times and not so good times.” 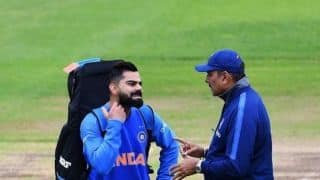