Cricket World Cup 2019: England, not India are the favourites for this World Cup: Sunil Gavaskar

Cricket World Cup 2019: England, not India are the favourites for this World Cup: Sunil Gavaskar

Gavaskar was unwilling to be drawn into the debate of whether India should boycott their round-robin match against Pakistan amid political tensions between the two hostile nations.

Batting great Sunil Gavaskar says Eoin Morgan‘s England will be the team to beat at the ICC World Cup 2019, with home advantage giving them a vital edge over his native India.

Top-ranked England recently outplayed Pakistan 4-0 in a one-day series to underline their supremacy in the 50-over format.

The home side, who have never won one-day cricket’s biggest prize despite making three finals, in 1979, 1987 and 1992, open their campaign against South Africa on Thursday at the Oval in London. “England, not India, are the favourites for this World Cup,” Gavaskar said.

ALSO READ: ‘Virat Kohli has matured amazingly from the time he took over captaincy from MS Dhoni’

“They have been playing outstanding cricket over the last few years and in familiar home conditions will be hard to beat,” said the former India captain.

Home advantage has been a big factor in recent editions of the showpiece event, with hosts India winning the 2011 trophy and Australia emerging victorious in Melbourne in 2015.

Since the start of 2018 England, who switched to a more aggressive brand of cricket after their humiliating first-round exit four years ago, have come out on top in ODI series against Australia, New Zealand, Sri Lanka and India.

Second-ranked India’s chances depend to a large extent on captain Virat Kohli.

Kohli, the number one batsman in Test and ODIs, last year defied critics who questioned his poor performance on the 2014 tour of England by hitting 593 runs in the 2018 Test series even though India lost 4-1.

But he has often received criticism over his captaincy, with pundits saying the 30-year-old leader often needs the experience of Mahendra Singh Dhoni behind the stumps.

Kohli recently scored 464 runs in the Indian Premier League (IPL 2019) but his side Royal Challengers Bangalore ended bottom of the eight-team table. “On an individual level he certainly can be as successful (in England) as he was last year for sure,” said Gavaskar, who scored more than 10,000 Test runs.

ALSO READ: Tried to make the best use of time away from game: KL Rahul

“But a captain is only as good as his team and Dhoni’s presence takes a big load off Kohli, especially after the first power play,” said Gavaskar, who was part of India’s World Cup-winning team in 1983 under Kapil Dev.

He was unwilling to be drawn into the debate of whether India should boycott their round-robin match against Pakistan amid political tensions between the two hostile nations.

Doubts were cast over the much-anticipated match in Manchester on June 16 after calls from many former India players and officials to forfeit their match to their arch-rivals.

Relations between the two nuclear-armed South Asian countries nose-dived after a suicide bombing in Indian-administered Kashmir in February killed 40 Indian security personnel and was later claimed by the Pakistan-based Jaish-e-Mohammad.

India has long accused Islamabad of harbouring militants who launch attacks on its soil but Pakistan has denied any role in the Pulwama attack, and Prime Minister Imran Khan offered cooperation in investigations if credible evidence were provided by India. “In a World Cup there is no option but to play all teams,” said a guarded Gavaskar. 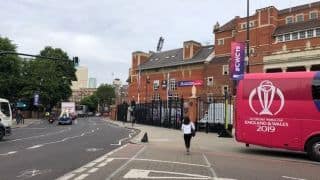 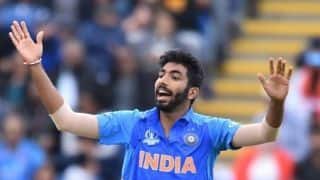