Smith believes that the final at the Lord's against hosts England will be a high-pressure game in which New Zealand would have a chance if their self belief quotient can trump the nerves.

Martin Crowe‘s batting was grace personified and had he been alive, he would have been the first one to acknowledge that Kane Williamson probably is the greatest batsman to have played for New Zealand, feels former wicketkeeper Ian Smith.

From Bert Sutcliffe in the 50’s to Bevan Congdon and Glenn Turner through the 60’s and 70’s and Crowe in 80’s, unarguably New Zealand’s best player of reverse swing, Williamson with his stylish batting and able leadership has surpassed them all, according to 62-year-old Smith.

“Kane is so highly ranked in the world, so it’s no surprise that he is seriously highly ranked in New Zealand too. Probably our best player and when you combine leadership with it, I think we can safely say so,” Smith told PTI in an interview ahead of his country’s second successive World Cup final.

According to the legendary Wasim Akram, no one read his reverse swing better than Crowe but Smith feels that Williamson’s achievements would have made him proud.

“I was a great friend of Martin Crowe, a buddy of mine, who is no longer with us. I think even Martin would have acknowledged that Kane is pretty special, and it’s hard to deny that,” said Smith, who was a part of New Zealand team that reached semi-final in 1992.

New Zealand defended a modest 239-run total against India in an exciting semi-final and Smith knew that the bunch of committed individuals under Williamson would have never given up.

“I knew they could defend that total because that’s the way they fight and scrap it out. Once they got to 239, it was all about bowling well in the first 5-10 overs. Had Rohit Sharma or Virat Kohli got away with it, it would have been all over,” Smith, who played 63 Tests, said.

The first spell from Matt Henry and Trent Boult to reduce India to 24 for 4 was as good as they ever bowled in limited overs.

“In such a situation, I think it’s unbelievable. They (Henry and Boult) had one chance to deliver. Henry in particular never quite had that reputation but with Trent Boult, you can expect that. It was brilliant,” said Smith, whose high-octane commentary in the final over of the India versus New Zealand semi-final, has been a hit on social media.

So was it a “Richard Hadlee’esque performance from Henry? Smith became cautious in his assessment.

“He is long way off Richard Hadlee’s consistency. You’ve got to do it every day. But with these guys, they had that moment, it was a make or break really, they got over the line,” said Smith, whose highest Test score of 173 was against India in 1990.

ALSO READ: Kane Williamson’s reading of pitch, leadership in the field was the difference: Mike Hesson

The Black Caps have been a team that is widely loved and respected and Smith has known no other way and wants the players to retain the legacy while competing hard.

“They don’t like controversy really. They won’t back away but they won’t invite trouble either. As a sporting nation, we don’t look to do anything but play. They have got the reputation of a nice guys image and you can’t get a nicer guy than Kane Williamson,” said Smith.

“Brendon McCullum was hard-nosed and aggressive but fair. I have been a New Zealander for 62 years and I am not surprised by it,” he said.

Smith believes that the final at the Lord’s against hosts England will be a high-pressure game in which they would have a chance if their self belief quotient can trump the nerves.

“I think five or six of this squad were there at the MCG (2015 final vs Australia). So they would be able to talk to the other guys. You can’t totally control what’s there in someone’s head and it doesn’t get any more special than this at the world stage,” he said.

Come Sunday, July 14, Smith believes that for one day, Black Caps will dominate the common Kiwi fan’s mind space which tends to remain ‘All Blacks’ for 365 days a year.

“Most of the New Zealanders lived through the last one (2015 final). It’s similar and it would be night over there (in New Zealand) when it starts.

“But this particular night, they will sit up and there’s secret admiration for this group,” the Aucklander said.

Sir Hadlee is currently fighting his battle against cancer but nobody would be happier than him, feels Smith.

“Hadlee will be the happiest right now. He has been a team man and a great New Zealander. What he started, if they could finish, it would be special for him,” he concluded. 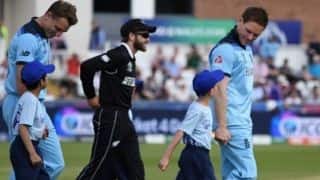