The New Zealand coach said that the sports fans across the rugby-mad country will be pulling an all-nighter in front of their television sets to watch the final.

New Zealand coach Gary Stead believes sports fans across the rugby-mad country will be pulling an all-nighter in front of their television sets when his side face tournament hosts England in the ICC Cricket World Cup 2019 final.

Neither side have won the World Cup before, although Sunday’s showpiece match at Lord’s will be New Zealand’s second successive appearance in the final after they finished runners-up to Australia four years ago.

In Britain, an agreement between rights-holders Sky and Channel 4 will see the match screened on free to air television in the hope that millions of new followers will tune in to watch an England side captained by Eoin Morgan go one better than their predecessors of 1979, 1987 and 1992 by winning the final.

Stead believes it will be a similar story back home as his team look to emulate New Zealand’s rugby union All Blacks by being crowned world champions.

That is despite a scheduled start time of 9:30 pm local time (0930 GMT), which could cause problems for bars and pubs in New Zealand who did not apply for a late liquor licence after failing to anticipate the Black Caps’ run to the final.

“My understanding is it’s on free to air back home also, which is awesome,” Stead told reporters at Lord’s on Friday.

“Many people will stay up late and I know a lot of them will be spending some late hours. Monday might be a public holiday back home because most of New Zealand will be staying up watching the game.”

“We’ve had a lot of supportive messages and we’re really excited about what’s ahead,” added Stead.

England thrashed New Zealand by 119 runs in the teams’ final group match but the Black Caps put that disappointment behind them with an upset 18-run semi-final win over India. 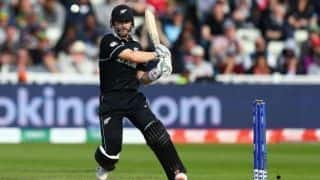