Headlined by Roy, Bairstow and Stokes, England reached the summit at Lord's.

This marks the first time since 1992 that an English team is in a World Cup final.

How did Morgan’s side make it?

England began their campaign on May 30 by smashing South Africa in front of a near-full house in London. Fifties to Jason Roy, Joe Root, Morgan and Ben Stokes followed a golden duck for Jonny Bairstow as England put up a total of 311/8 in their 50 over. Then Jofra Archer, on World Cup debut, rocked South Africa with his pace to the tune of 3/27 and backed by two wickets to Stokes – who also held an incredible one-handed catch on the boundary – and Liam Plunkett, England won by 104 runs.

A narrow loss to the team whom they beat 4-0 in the weeks leading upto the World Cup left England smarting. Having conceded 348 to Pakistan, Morgan’s team struggled in their chase before Root and Jos Buttler struck centuries to revive hopes. The pair put on 130 in 17.3 overs, with Buttler raising three figures off 75 balls. But through Shadab Khan and Wahab Riaz, Pakistan roared back to seal a 14-run win.

England hit back against Bangladesh with a massive win at Sophia Gardens. Roy led the demolition with 153 off 121 balls while brisk fifties to Bairstow and Root and a late assault from Plunkett (27* off nine balls) took the hosts to 386/6. Archer and Stokes took three wickets apiece in Bangladesh’s reply of 280, out of which 121 were from Shakib Al Hasan.

Next, a hapless West Indies were pulverised at The Rose Bowl where Archer (3/30) and Mark Wood (3/18) did splendid work to set England a target of 213. An injury to Roy sent him off the field during West Indies’ innings, and in his place Root opened the innings and ticked off an unbeaten 100 off 94 balls. Chris Woakes was promoted to No 3 and made 40 in a win sealed in the 32nd over.

A monstrous hundred from Morgan, featuring a world-record 17 sixes, drove England to a huge win over Afghanistan in Manchester. Bairstow (90) an Root (88) missed centuries but England’s skipper made no mistake, hitting his way to 148 from 77 balls (strike-rate 208.45) to pummel Afghanistan’s bowlers. Moeen Ali chimed in with 31* from nine balls to help the total to 397/6, after which Wood and Archer vied for honours as the quickest bowlers of the World Cup.

In the upset of the World Cup, Lasith Malinga bowled Sri Lanka to a stunning 20-run win with 4/43, his victims including Root and Buttler in a spell that swung the game. Chasing Sri Lanka’s modest 232/9, England were bowled out for 212 for their second loss of the tournament. Also starring was Dhananjaya de Silva with his offbreaks, which accounted for three wickets in nine balls. The World Cup had been turned on its head with this result.

After the loss to Sri Lanka, England were beaten by Australia to leave their presence in the World Cup semi-finals in doubt. Set a target of 286, England surrendered nine wickets to the pace pair of Jason Behrendorff and Mitchell Starc. Stokes kept the chase together with a brave 89, but when he was magnificently yorked by Starc the game was as good as over.

Needing a win to make the semi-finals, England defeated India to stay afloat. Bairstow starred with his first hundred in a World Cup, adding 160 with the returning Roy (66) before Stokes revived the innings with 79 off 54 balls. Defending 338, England removed KL Rahul for 0 but were frustrated by Rohit Sharma (101) and Virat Kohli (66). Plunkett’s three wickets helped swing the game back England’s way and India ended on 306/5.

England’s place in their first World Cup semi-final since 1992 came on the back of another Bairstow hundred (109) in an opening stand of 123 with Roy (60) to help the hosts on their way to 305/8. Once Kane Williamson and Ross Taylor were run out, New Zealand’s chase gave way and they were bowled out for 186 in 45 overs.

England returned to a World Cup for the first time in 27 years after crushing Australia. Two early wickets to Woakes – Man of the Match in Birmingham – in a final outing of 3/20, backed by three wickets to Adil Rashid and two for Archer, saw Australia limited to 223 in 49 overs.

Then Roy continued his sensational World Cup with 85 off 65 balls while adding another century stand with Bairstow (34). A wrong call cut Roy off before a century, but Root (49*) and Morgan (45*) ensured there were no more hiccups as England won in 32.1 overs. 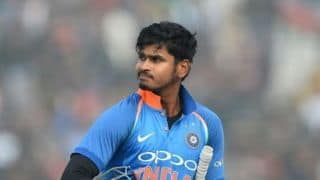 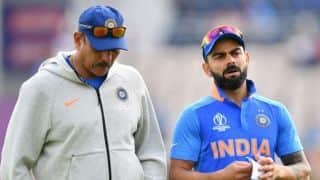