West Indies begin their World Cup campaign against Pakistan at Trent Bridge on May 31.

Can West Indies take the form that has made them such a potent force in Twenty20 cricket into the ICC Cricket World Cup 2019?

That is the question confronting Jason Holder‘s side as they head into the one-day showpiece in England and Wales that starts on May 30.

The Caribbean team, who open their campaign against Pakistan at Trent Bridge the following day, have won two of the past three editions of the World T20.

With the increasing similarity in the way teams approach the two formats of the white-ball game, there seems no reason why West Indies cannot again be a force in 50-over cricket as well. Yet they failed to qualify for the 2017 Champions Trophy ODI tournament in England and only just scraped into this World Cup through the qualifiers.

It is all a far cry from the West Indies’ glory days, when a powerful squad under the captaincy of Clive Lloyd won the first two men’s World Cups, in 1975 and 1979, and lost in the 1983 final to India.

A long-running player dispute appears to have been put behind them with the defeat of controversial Cricket West Indies president Dave Cameron in a recent election.

With veteran opener Chris Gayle firmly back in the one-day fold, they can do real damage.

The 39-year-old left-hander has signalled that he remains a potent force ahead of what could be his last major global tournament with some typically blistering innings, including 162 off just 97 balls in Grenada during a drawn series at home to World Cup favourites England earlier this year.

(READ: Bowlers won’t say it on camera, but they re scared of me: Gayle)

Yet there is more to West Indies’ batting than the self-styled “Universe Boss”, with Evin Lewis, Shimron Hetmyer and Shai Hope all capable of telling contributions in a line-up also boasting dangerous allrounder Andre Russell.

One problem for West Indies, as with many other sides, could be how their attack fares on what are likely to be a series of excellent batting pitches.

But Shannon Gabriel, Kemar Roach and Oshane Thomas have the raw pace to unsettle batsmen regardless of conditions, while variety comes in the form of left-arm paceman Sheldon Cottrell.

Such has been the impact of Holder’s captaincy in trying circumstances that his ability with both bat and ball is often overlooked. But West Indies’ spin options were depleted when T20 star Sunil Narine ruled himself out because he felt a finger injury would prevent him bowling the longer spells required in one-day cricket.

“We have some good young players who have been improving and developing well,” former West Indies allrounder Dwayne Bravo told the ICC website.

“I have talked to captain Jason Holder and others and I believe this team will be a threat to all teams in the World Cup. Anyone can do well on a given day but I feel confident about West Indies as we see a good mix of experience and youth.” 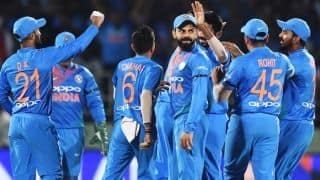