While Australia have won as many as five World Cup titles, India and West Indies have won two each, with Pakistan and Sri Lanka clinching the trophy in 1992 and 1996 respectively.

The 12th edition of the cricket World Cup will kick off when the hosts England take on South Africa in May 30 at The Oval in London. The Eoin Morgan-led side is the pre-tournament favourite to lift the coveted trophy. However, there will not be any shortage of pressure on England, who are yet to win a World Cup since its inception in 1975.

While Australia have won as many as five World Cup titles, India and West Indies have won two each, with Pakistan and Sri Lanka clinching the trophy in 1992 and 1996 respectively.

Clive Lloyd and his men took the cricket world by storm as they dominated the oppositions, till the semi-finals and then beat Australia by 17 runs in the final to win the inaugural edition of the World Cup in 1975 in England.

The Caribbean side, with their pace battery and batting firepower, had no match whatsoever as they successfully defended the title that they had won four years ago. Lloyd s team remained unbeaten throughout the tournament and clinched their second successive World Cup title, beating the hosts England by 92 runs.

When the Kapil Dev-led unit left the Indian shores, there were not even the handfuls that gave India a remote chance to win the title. However, Kapil s Devils played fearless cricket and stunned the mighty West Indies in the final to complete a sensational World Cup triumph in 1983.

Under the spirited leadership of Allan Border, the side which was coached by the former Australian cricketer, Bob Simpson, and termed as rank outsiders ahead of the tournament, defied the odds and clinched their first World Cup, beating arch-rivals England in the final.

Imran Khan wore that famous cornered tiger’s T-shirt at the toss and Pakistan, who once were on the verge of being knocked out from the tournament, turned the tables and beat England, with a certain Wasim Akram showcasing some brilliant bowling skills.

Led by a feisty Arjuna Ranatunga, Sri Lanka, who were one of the co-hosts alongside India and Pakistan, beat the Mark Taylor-led Australia in the final to clinch their maiden World Cup title. While Ranatunga marshalled his troops successfully, the tournament was lit up by the likes of Sanath Jayasuirya and Aravinda de Silva and Asanka Gurusinha.

Australia held their nerves more than once before they made it to the final, including in the most famous World Cup semi-final where they pipped South Africa. However, the Steve Waugh-led unit ran riot in the final and beat the Wasim Akram-led Pakistan side to clinch the World Cup 1999.

While Waugh was succeeded by Ricky Ponting, the outcome did not change as the Australian did not lose a match in World Cup 2003 and put up a clinical performance in the final to beat the Sourav Ganguly-led Indian side to win the second successive World Cup.

Led by Ponting, Australian side completed a hat-trick of wins as they beat Sri Lanka to win the World Cup 2007 final and clinched their fourth World Cup title.

There was no shortage of pressure with the World Cup being played on the home soil. But led by the ever so calm MS Dhoni, India overcame the pressure and did not let the expectations of many take the toll on the team to bag their second World Cup trophy, with the captain leading from the front in the final, along side a solid knock from Gautam Gambhir.

While Australia could not win when they, along side New Zealand, hosted the World Cup in 1992, the Michael Clarke-led side unit made sure they did not have an encore of that performance and beat the co-hosts New Zealand, led by Brendon McCullum to win 2015 World Cup. This was Australia s fifth World Cup triumph. 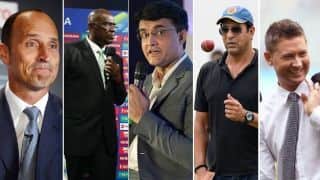