Australia captain Aaron Finch won the toss and opted to bat first against England in the second semi-final of the ICC Cricket World Cup 2019.

Australia captain Aaron Finch won the toss and opted to bat first against England in the second semi-final of the ICC Cricket World Cup 2019 at Edgbaston, Birmingham on Thursday.

This is the second meeting between the two rivals in the ongoing tournament with Australia beating England in the league stage last month. England have gone unchanged for the contest but Australia have made one change to their playing XI with Peter Handscomb making his world cup debut replacing Usman Khawaja.

The two teams have taken a contrasting route to the last-four stage with England slipping before winning their final two matches to seal a semi-final spot. On the other hand, Australia lost just one of their nine matches and were the first team to enter the knockouts.

“Hopefully we put up a big total. It gives a lot of experience to the occasion and gives the guys a chance to talk to people who have been in that position before. It is nice but come the day it does not count for a helluva lot,” Finch said at the toss.

England captain Eoin Morgan said, “The trend of the tournament has been to bat first. Although Edgbaston has been a magnificent ground. The last time we played here against India, we saw a high score of 340 and them almost chasing it down. Not really bothered as before the World Cup we preferred to chase. I think whoever plays the best cricket will go through.” 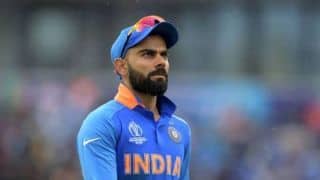