Cricket World Cup 2019: I took none for 70: 92 runs versus West Indies notwithstanding Nathan Coulter-Nile may not play against India

Cricket World Cup 2019: I took none for 70: 92 runs versus West Indies notwithstanding Nathan Coulter-Nile

Starc and Cummins are Australia's lead pacers, while coach Langer has indicated that Lyon has been considered as a second spinner alongside Zampa.

Australia‘s fast bowling all-rounder Nathan Coulter-Nile says he is not sure of his place for the big-ticket World Cup encounter against India despite a match-winning 92 against West Indies.

His 92 off just 60 balls proved vital in Australia’s 15-run victory, but the 31-year-old believes his expensive outing with the ball in Bristol may not help his cause.

Asked if he felt his spot was secure, Coulter-Nile said: “No. I took none for 70.

“We’ve got two world-class (fast) bowlers (on the sidelines). I’m not in the team to make runs, hopefully the top order does that, so I wouldn’t be surprised if I got dropped for the next game,” he was quoted as saying by Cricket Australia. (ALSO READ: Cricket World Cup 2019: We always thought Nathan Coulter-Nile had the ability, he was exceptional: Aaron Finch)

“I’m in the team to take wickets and I’ve had two wicketless games, so we’ll see how we go.”

Coulter-Nile’s 92 at Trent Bridge was the highest score by a No. 8 in a World Cup, 58 runs more than his previous best ODI score.

Mitchell Starc and Pat Cummins are Australia’s lead pacers, while coach Justin Langer has indicated that Nathan Lyon has been considered as a second spinner alongside Adam Zampa.

Back-up pacers Jason Behrendorff and Kane Richardson could also come into contention for the India game at The Oval.

Coulter-Nile insists he is not bothered by the competition for spots. “I actually like it,” he said. (ALSO READ: Cricket World Cup 2019: Wobble against Windies wake up call for Australia, India may play three pacers against us: Ponting)

“I think it’s good to have competition and it wouldn’t be good if we had no one pushing you trying to get better, so I love it.”

Coulter-Nile combined with Steve Smith (73) for a counter-attacking stand of 102 off just 89 balls power Australia to 288 against the Windies.

“To have a guy play the innings of his life was something I’m sure you guys enjoyed watching,” said vice-captain Alex Carey, who earlier scored 45 off 55 deliveries. 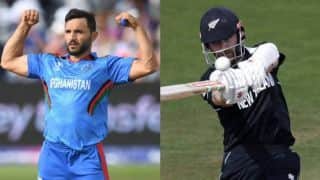