Tahir has been South Africa s strike bowler in recent times and captain Faf du Plessis went on record to mention that the veteran has been responsible for the Proteas ascent.

South Africa finally announced their arrival at the ICC World Cup 2019 with a convincing nine-wicket victory over Afghanistan their first win in the tournament after five matches at Sophia Gardens in Cardiff on Saturday.

Put into bat, Afghanistan were bundled out for 125 in 34.1 overs with 40-year-old legspinner Imran Tahir picking up four wickets and Chris Morris pocketing three. Quinton de Kock then fired 68 as South Africa chased down the revised DLS target of 127 in 28.4 overs.

Tahir has been South Africa s strike bowler in recent times and captain Faf du Plessis went on record to mention that the veteran has been responsible for the Proteas ascent.

Morris and Tahir were fantastic in the middle overs as they got wickets. He (Tahir) has single-handedly made us a strong team in the last two years with his ability to take wickets in the middle overs, Du Plessis said at the post-match presentation ceremony.

South Africa took a much longer time than expected to chase down the target. A shorter run-chase would have boosted the net run-rate which now stands at -0.208. Hashim Amla in particular took 83 balls to reach 41*, while De Kock, who was dismissed by Gulbadin Naib, fired eight boundaries in his 68 off 72.

Naturally Quinton plays quite freely but it was important for him to see off the new ball. We needed a 60 or 70-run stand upfront and we could have worked on the run rate later, Du Plessis defended his openers.

It was important for Amla to get amongst the runs, he will be important for us in the upcoming games. In the next four games, net run-rate is not going to play a massive role if you win those games. So, we need Hashim to score runs for us, hence he needed a not-out innings today.

Meanwhile, Tahir, who picked up the Man of the Match award, was happy he could do the job for his team. Yeah, I really enjoyed my workout today, pleased with the way the ball came out (of my hand), I had a role to play for my team, have been working hard; really pleased with our win today, he said.

Afghanistan captain Naib rued the contributions from the lower middle-order. We did well against the fast bowlers but the batsmen didn’t take responsibility in the middle overs. We needed to build partnerships, but we committed the same mistake by not having those partnerships. We have a lot of batsmen in the team with Rashid Khan coming at 9. We need our lower-middle order batsmen to contribute in the upcoming matches, he said. 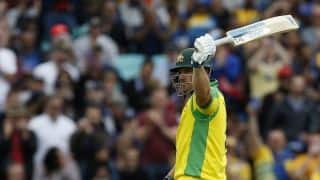