The loopholes in the International Cricket Council's (ICC) planning for the 2019 World Cup are coming to the fore with each passing day.

The loopholes in the International Cricket Council’s (ICC) planning for the 2019 World Cup are coming to the fore with each passing day. If the failure to cover grounds effectively to beat the rain wasn’t enough, it has now been learnt that the Indian players have been asked to workout in private gyms as the ones in the team hotels aren’t adequate.

Sources in the know of developments said that the equipment in the hotels that have been booked for the players don’t match the needs of the Indian cricketers and as a result, they have been provided passes to train in private gyms.

“Yes, the equipment that is there in the team hotels aren’t adequate and the boys have been training in private gyms because they meet the needs of the cricketers and the fitness work that the boys put in while preparing for a game,” the source said.

But this isn’t the only issue that players are facing while playing in the World Cup. While they should get perfect facilities so that they can focus on the job at hand — win matches and lift the trophy — the peripheral issues are one too many.

“Let alone the fact that the majority of the hotels in the UK lack proper gymnasiums and swimming pools, air conditioning is still a novelty which is restricted to only a few hotels. England definitely needs an upgrade,” the source added.

Considering the fan-following that Indian players have, security has also been a pain for the team management because of the restrictions that have been put in place.

“Security personnel are asked to be invisible, but the actual physical security is the need considering the number of fans who are moving around the hotels in hope of catching a glimpse of their favourite stars,” the sources revealed.

In fact, apart from all this, travelling has been a major cause of concern as the cricketers have been asked to take buses rather than the trains which save time. “Intercity travel is still being done in buses whereas football teams in the English Premier League have moved onto trains for travel as it saves time,” the source pointed.

A senior BCCI official said that it was indeed sad considering the demands ICC has every time the Indian board is hosting a mega event.

“The ICC seems intent on making it a World Cup to remember and not only for the rain, but also for its logistical planning and facilities. The kind of demands they place on the BCCI when we are hosting a tournament are somewhat akin to a head of state visit.

“There have been demands of a police escort for a match referee in the past in India and here they have been unable to provide telecast of games and even access to an equipped gym in the team hotels. This is when the ICC budget for the tournament in England is much greater than its budget for a tournament in India,” he told Cricketfanatic.

“I shudder to think what would have happened if there was equity in terms of budgeting. It seems that the ICC’s staff are happily rooted in their ivory tower which is usually a testament to incompetent leadership.” 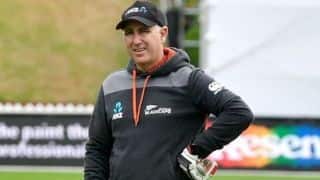