Chasing a record 353, Australia made 316 at Kennington Oval to lose their first game.

LONDON: India have made it two in two at the ICC Cricket World Cup 2019 by defeating defending champions Australia by 36 runs on Sunday at Kennington Oval.

Driven to 352/5 in 50 overs, which is their fourth-best total in a World Cup match, on the basis of Shikhar Dhawan‘s 117 and fifties to Virat Kohli and Rohit Sharma, India limited Australia to 316 in their full quota.

Needing to produce their best chase in World Cups – their highest remains the 287 chasing against New Zealand in 1996 – Australia failed to produce a blazing start, with David Warner scoring an oddly unconvincing 56. Steve Smith kept runs ticking over with 69 from 70 balls, but the asking rate kept creeping out of reach. Alex Carey‘s unbeaten 55 off 35 proved an irritant to India and ensured Australia were not bowled out.

After winning the toss under a clear sky, Kohli termed batting first a no-brainer. He then followed Dhawan and Rohit to a half-century of his own, as India’s batsmen made merry on a flat Kennington Oval surface. As in India s opening match against South Africa in Southampton, Dhawan was made to look very fidgety early in the match against pace.

There was nothing much in the surface, but Dhawan s early troubles against Mitchell Starc and Pat Cummins didn t indicate that he was in line for a dominating century. And yet, having seen out that initial testing period, he flourished and raised three figures off 95 deliveries in front of a full house, one distinctly blue in wholesome support for India.

In particular, Dhawan was hurried by Starc s pace and bounce early on. Constantly looking to put the left-arm quick off his lines, he awkwardly tried to whip the ball to the legside off the stumps and once was denied a four by a diving Glenn Maxwell at point when he chopped into the ground. In the next over, Cummins zipped the ball past his Dhawan s outer edge when the batsman tried to manufacture a nothing shot across the line.

Starc provided an opening in his first over when Rohit was on 2, an aerial clip off the pads put down by at square leg by a leaping Nathan Coulter-Nile. A tough chance, but one that needed to be taken. Rohit was also hurried into a hook shot by Starc, the ball instead hitting him on the body.

India got their first boundary in the fourth over, when Dhawan finally connected a good-looking shot. Seeing a bit of room from Cummins, he pierced the gap at cover with a firm push. Immediately, a large section of Indian fans started to chant, on loop: “Jeetega bhai jeetega, India jeetega!”.

(ALSO READ: For these Indian fans from around the globe, there s nothing like cricket)

The horse had bolted. Dhawan s half-century was raised off 53 balls, and the 100-run stand with Rohit came up in 19 overs. Rohit threatened damage with six off Coulter-Nile followed by consecutive fours off Marcus Stoinis, but fell against the run of play. On 57, he nicked Coulter-Nile to Carey having added 127 in 22.3 overs with Dhawan.

A thick edge off Cummins over Carey took Dhawan into the nineties, and his century came up off 95 balls with a scampered single. Dhawan had to wait until a run-out appeal was confirmed, and then out came his trademark eagle-armed celebration of three figures. Three more boundaries punctuated his innings, which ended when he attempted to clear midwicket off Starc but found the man stationed just inside the boundary.

Kohli was understated during his 82, content to let Rohit and then Hardik Pandya lead the way. On 0, looking to run Coulter-Nile down to third man, Pandya edged to Carey who dropped the catch to his right. It proved a costly drop, for Pandya tucked into the bowling with glee. Glenn Maxwell and Adam Zampa were slogged for six, Coulter-Nile forced to evade a hammered drive for four and Cummins lofted and upper-cut with ease during his 27-ball 48 in a partnership of 81 in 8.5 overs.

MS Dhoni thrilled the fans with a cameo 27 from 14, which helped India score 51 off the last four overs, and Kohli was out off the penultimate ball of the innings when he slapped Stoinis to deep cover.

Already facing a mountain, Australia had to contend upfront with the best bowler in ODIs. Jasprit Bumrah was his usual self in a brief spell of 3-1-12-0 during which he looked on in anguish as Warner dragged the ball onto the stumps only for the bails to remain lodged. Bhuvneshwar Kumar kept up the pressure from the other end in a five-over spell that cost just five runs, but in Pandya’s second over Aaron Finch decided something had to give.

After Warner crunched Pandya’s first ball for four, Finch teed off with a six and two fours in succession to make it 19 from the over. The aggression was short-lived, for on 36 Finch was run out by a fine throw from Kedar Jadhav in the deep.

Warner and Smith put on 72 for the second wicket but never threatened India. Warner was particularly scratchy and subdued in an innings of 56 that needed 84 balls and contained just five fours. He tried to break free against Yuzvendra Chahal and found deep midwicket, leaving Australia’s asking rate at over 8.60 an over.

Usman Khawaja made an attractive 42 from 39 balls before he tried to manufacture a shot against Bumrah and was bowled when walking right across his stumps. Smith briefly accelerated after getting past 50, and then missed a shot to Bhuvneshwar and was lbw for 69. Two balls later, Stoinis was bowled by Bhuvneshwar and the match was all but over.

Maxwell cracked a few fours, fell to Chahal and India closed in for the kill. Yuvraj Singh to bring down curtains on his career on June 10? 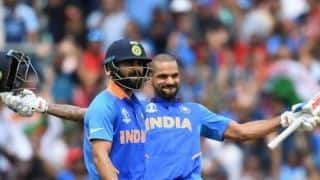