Jasprit Bumrah says India have a “good headache” with every player in top form going into Tuesday’s World Cup semi-final against New Zealand.

Kohli has hit five half-centuries to play a key part in his team’s seven victories in nine group games and Bumrah believes the skipper has a wealth of quality options to pick from when he names his line-up for the semi-final.

“Everybody has chipped in with wickets and with the bat. There’s a healthy competition.

“It’s a good headache to have when everyone’s performing and everyone’s in good nick and that’s something you love to have going into a crucial game like next week’s semi-final.”

The 25-year-old Bumrah has taken 17 wickets in eight innings, while his Indian pace partner Mohammed Shami has picked up 14 scalps in four outings.

Tell Bumrah that he has led the attack with aplomb and the premier fast bowler says that it is a combined effort.

“I don’t take praise or criticism seriously,” said Bumrah. “The only focus for me is on my preparation, my execution and what I can do for the team.

Bumrah’s fine form has impressed former India captain Krishnamachari Srikkanth, who believes the paceman is now established as the fulcrum of the team’s bowling attack.

“He really is the leader of the Indian attack,” Srikkanth wrote in his ICC Media column.

“He is the main weapon, he takes wickets, he can put on the brakes when the opposition are getting on top, he can do everything.” 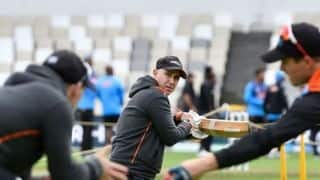