Shannon Gabriel replaced Kemar Roach while Sri Lanka made as many as three changes to their playing XI.

Jason Holder has won the toss and West Indies have elected to bowl against in the 39th match of the ICC Cricket World Cup 2019 at the Riverside Ground in Chester-le-Street.

A fresh wicket. It should be responsive first up with the ball, said Holder. We still got pride to play for, and we need to play a perfect game. Bowlers have done well so far, and hopefully they can respond and the batsmen can chase it down. Roach is unwell, and Gabriel will play, he added.

While the semifinals spot out of reach, both the teams will be playing for pride and will be keen to flourish on a high.

“We would have liked to bowl. In the last match, the pitch did respond with the new ball. We wanted to take early advantage with the new ball and take a couple of wickets early in the morning. We couldn’t pass 250 and haven’t really field properly. We need the middle- and the top-order to fire in this match. We have to focus on the World Cup for now – the future plans can wait. Three changes for now,” said Dimuth Karunaratne, Sri Lankan skipper. 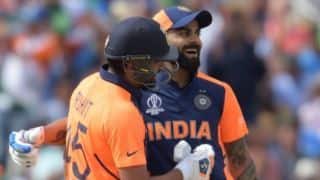