Jimmy Neesham scored unbeaten 97 while Colin de Grandhomme scored 64 as New Zealand recovered from 85/5 to post 237/6 on the board.

Colin de Grandhomme and Jimmy Neesham did a fine rebuilding job as New Zealand recovered from 83/5 and posted 237/6 on the board in the 33rd match of the ICC Cricket World Cup 2019 at Edgbatson in Birmingham on Wednesday against Pakistan.

The two added 132-run partnership before de Grandhomme was run out for 64 in the 48th over. Neesham, meanwhile, remained unbeaten on 97 as the Blackcaps put up a respectable on the board.

Mohammad Amir bowled Martin Guptill with the score on five before Shaheen had opener Colin Munro caught by Haris Sohail in the slips for 12.

Ross Taylor then edged a Shaheen delivery to wicketkeeper Sarfaraz Ahmed to depart for three and Tom Latham departed in similar fashion.

The skipper steadied the ship after Shaheen Shah Afridi‘s burst of three wickets but Shadab produced a beautiful delivery to entice him into giving an edge to wicketkeeper Sarfaraz Ahmed and he departed for 41.

Overnight rain delayed the start in Birmingham by an hour but the umpires decided the match would remain at 50 overs per side.

New Zealand, who are second on the 10-team table with 11 points, kept the same team for the fifth match in a row.

Pakistan, who are seventh in the table with five points, also kept faith with the team that beat South Africa at Lord’s on Sunday.

If New Zealand win they will join title-holders Australia in the semi-finals. 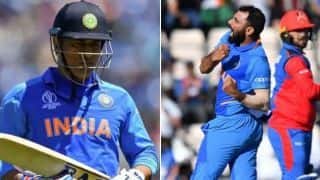