There was a lot of criticism on that decision, not only on social media but by the cricket fraternity in general, after India's loss, but Shastri has now revealed that 'whole team was was clear on it'.

Revealing the Indian team management’s decision to send MS Dhoni as late as No.7, despite a top-order collapse, against New Zealand in the ICC Cricket World Cup 2019 semi-final match at Old Trafford, Manchester on July 9, coach Ravi Shastri that they did not want Dhoni to go in early and lose his wicket, as that would have ‘killed the chase’.

There was a lot of criticism on that decision, not only on social media but by the cricket fraternity in general, after India’s loss, but Shastri has now revealed that ‘whole team was was clear on it’. Dhoni made a valiant 50 off 72, adding 116 runs with Ravindra Jadeja for the eighth wicket, before has was run-out in the 49th over of the chase. ALSO READ: India assistant coach Sanjay Bangar on his way out?

It was a team decision. Everyone was in with it and it was a simple decision, too. Last thing you wanted was Dhoni coming out to bat early and getting out that would have killed the chase,” Shastri told the Indian Express, a day after India lost to NZ. “We needed his experience later. He is the greatest finisher of all times and it would have been criminal to not make use of him in that way. The whole team was clear on it,” he went on to clarify. ALSO READ: Youngsters in Indian team still need MS Dhoni s mentorship: Diana Edulji

After the loss, Shastri gave the tam a pep talk, stating to be proud of what they have done for the last two years.

Walk out with your heads held high. Be proud. Those 30 minutes can t erase the fact that you guys have been the best team in the last couple of years. You guys know it. One tournament, one series and that, too, 30 minutes of play can t decide that. You guys have earned that respect. Of course, we are all hurt and disappointed but, in the end, be proud of what you have done for the last two years, Shastri said, as quoted by the national daily. ALSO READ: Team will work hard and come up with more success in future: BCCI acting president

However, the the former India captain did concede that the team failed to get a solid batsman in the middle and the injuries to Shikhar Dhawan and then to Vijay Shankar made matters worse.

“In hindsight, yes, we did need a solid batsman out there in the middle order. But now, that s something for the future. That s a position that was always giving us problems, but we just couldn t nail it. (K L) Rahul was there but then Shikhar Dhawan got injured. Then Vijay Shankar was there, and he got injured. We just couldn t control it he added. 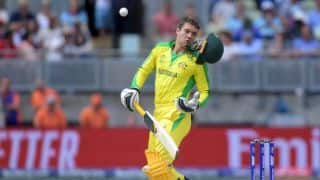