Sri Lanka made two changes, Australia one on Saturday in London.

LONDON: Sri Lanka captain Dimuth Karunaratne has won the toss and chosen to field against Australia in game 20 of the ICC Cricket World Cup 2019 at Kennington Oval on Saturday.

Twelve days since their last match, Sri Lanka are hoping for a full game today. Since they beat Afghanistan on June 4, Karunaratne’s team has had two consecutive ODIs in Bristol washed out without a ball bowled.

Sri Lanka have welcomed back Nuwan Pradeep, who was passed fit on match morning, and left out Suranga Lakmal. Malinda Siriwardene also got a game.

Australia have chosen the same XI that beat Pakistan in Taunton, meaning that they are playing four fast bowlers.

Australia have dropped Nathan Coulter-Nile for Jason Behrendorff. Aaron Finch, who has now lost all five toss at the World Cup, said he would have bowled first too. 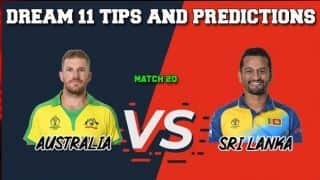