Man-of-the-match Sharma notched up fifth hundred in World Cup 2019 to pass the mark set by Sri Lanka's Kumar Sangakkara, who scored four hundreds at the 2015 tournament.

Rohit Sharma became the first player to hit five centuries in a single World Cup as India cantered to a seven-wicket win in their final World Cup group match against Sri Lanka on Saturday.

The opener smashed 103 off 94 deliveries as semi-finalists India chased down their target of 265 in 43.3 overs to end the group stage with seven wins, one defeat and a washout.

Sharma’s opening partner KL Rahul top-scored with 111 as the pair put on 189 runs for the first wicket to put India in complete command.

Man-of-the-match Sharma reached his milestone with a boundary off Kasun Rajitha to pass the mark set by Sri Lanka’s Kumar Sangakkara, who scored four hundreds at the 2015 tournament.

His century came off 92 balls, with 14 fours and two sixes. Sharma was dismissed shortly afterwards, caught by Angelo Mathews off the bowling of Rajitha.

Known as the “hitman”, Sharma leads the current World Cup’s run-scoring charts with 647 runs in eight matches after hitting his third successive century.

“I’m just trying to go out there and do my job, I’m not thinking of milestones,” Sharma said. “If I play well these things will happen on the way.

“I have learned from my mistakes in the past. I don’t go into a match thinking of hundreds. Every day is a new day.”

He is only the fourth batsman after Sachin Tendulkar, Matthew Hayden and Shakib Al Hasan to score more than 600 runs at a single World Cup.

“3 consecutive 100s and 5 in a single @cricketworldcup is just phenomenal, Rohit,” Tendulkar wrote.

Rahul registered his first century of the tournament but was caught behind shortly before the end of the game off veteran paceman Lasith Malinga — playing his final World Cup match — after hitting 11 fours and one six.

Skipper Virat Kohli remained unbeaten on 34 and Hardik Pandya hit the winning runs to give India a chance of finishing above group leaders Australia, who are playing South Africa in Saturday’s later match at Old Trafford.

“We wanted to play good cricket but we didn’t expect to do this well heading in to the semis,” Kohli said.

“That’s what hard work gets you. I am really proud of this team as a captain, they are amazing people.

“More or less everything is set for the semis but we don’t want to be one-dimensional. We need balance in the side. We are very happy.

“England or New Zealand next? The opposition has never mattered. We don’t focus on what they bring to the table. If we play well we can beat anyone.”

Earlier, Mathews hit his third one-day international century and put on 124 runs for the fifth wicket with Lahiru Thirimanne (53) to give Sri Lanka a respectable total after they were reeling at 55-4.

Jasprit Bumrah returned impressive figures of 3-37 in his 10 overs as India, who had already qualified for the semi-finals, restricted Sri Lanka with some quality bowling.

The 1996 champions finished their World Cup campaign with three wins, four defeats and two games ending in no result.

Captain Dimuth Karunaratne said Sri Lanka would take stock as they try to build for the future.

“After this World Cup we have to think about what we have to do and what we got wrong. We will talk to the selectors and find some new talent,” he said. 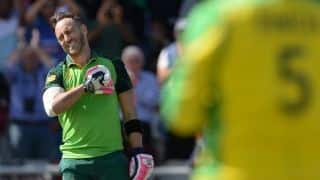