Dhawan did not participate in the drills, he was seen walking around the field at Trent Bridge.

India captain Virat Kohli confirmed injured opener Shikhar Dhawan will be in a plaster of a couple of weeks. Dhawan was hit by a Pat Cummins bouncer on his left thumb, but batted through the pain and notched up a scintillating century in an ICC World Cup 2019 match against Australia at The Oval.

Dhawan was spotted at India’s training session in Nottingham on Thursday. While he did not participate in the drills, he was seen walking around the field at Trent Bridge.

Shikhar will be in a plaster for a couple of weeks, we’ll assess and see. Hopefully, he’ll be available for the later half and the semi-finals. He’s motivated, we wanted to keep him back,” Kohli said after India s match against New Zealand at Trent Bridge was called off on Thursday due to incessant rain. (ALSO READ: Rishabh Pant confirmed as cover for Shikhar Dhawan, to fly to England this week)

The India-New Zealand match is the fourth match that has been washed out in this World Cup. No other World Cup has had as many washouts. Disappointing not to get any game time at all. From the players point of view and where the teams are placed, it was better suited not to take the field when it is not safe to play. Don’t want an injury at this stage, Kohli said.

We’ve been playing some good cricket, we’re not too worried about where we stand. Having two wins does give you confidence. A couple of practice sessions and we should be fine.

India next face arch-rivals Pakistan in a blockbuster match at Old Trafford, Manchester on Sunday. Kohli played down the hype surrounding the clash between both teams. (ALSO READ: Shikhar Dhawan hints tournament not over for him yet)

As soon as you enter the field, it’s all calm. All the excitement and frenzy around the game could intimidate guys who are playing for the first time, he said.

For us, it’s about executing our skills and we’re all professionals. It’s been competitive for a while now, it’s been a marquee event and it’s an honour to be a part of such an event. (ALSO READ: ‘Pakistan need to take inspiration from 2017 Champions Trophy to defeat India this time’)

Walking away with a point after the washed out match against New Zealand, India are now in the third spot while New Zealand continue to lead with 7 points. Both teams are unbeaten in this tournament so far. 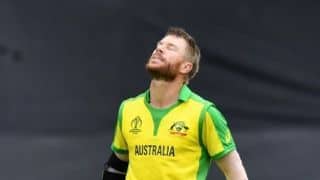 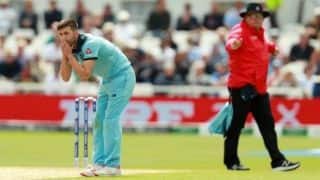