Dhawan's place in India's XI for the remaining matches looks set to go to KL Rahul.

BRISTOL: Rishabh Pant has been confirmed as cover for the injured Shikhar Dhawan, and the process for him to join the Indian cricket team in England is underway.

CricketCountry has learned that Pant will only be named as Dhawan’s batting replacement should the India opener fail to recover from the hairline fracture on a thumb sustained at Kennington Oval last week.

Dhawan remains part of India’s squad at the ICC Cricket World Cup 2019. On Tuesday, he was sent to Leeds for further assessment on his injured thumb. Later in the day, the BCCI released a statement saying:

Team India opening batsman Mr Shikhar Dhawan is presently under the observation of the BCCI medical team. The team management has decided that Mr Dhawan will continue to be in England and his progress will be monitored. Mr Dhawan sustained an injury on the back of his left hand in the region between the index finger and thumb during the CWC 2019 league match against Australia.”

Dhawan has been ruled out of India’s matches against New Zealand at Trent Bridge on Thursday and against Pakistan at Old Trafford on Sunday. He remains with India’s squad, and should the BCCI name Pant as his replacement for the tournament, the only way back for a fit Dhawan is if another player gets injured.

Dhawan’s place in India’s XI for the remaining matches looks set to go to KL Rahul. In the middle order, India have two options for No 4 in Vijay Shankar and KL Rahul.

India are due to train at Trent Bridge from 10:00am local time today, the BCCI confirmed on Wednesday. 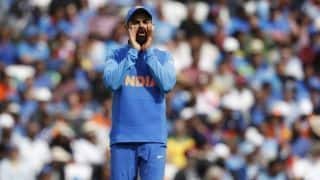 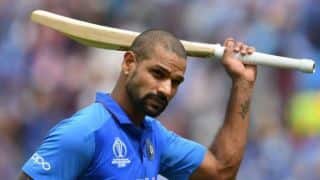 Cricket World Cup 2019: Shikhar Dhawan hints tournament not over for him yet