Official word from the Indian team is expected later on Tuesday, after Dhawan is assessed.

BRISTOL: India opener Shikhar Dhawan looks set to be sidelined for up to three weeks from the ICC World Cup 2019 for approximately owing to the thumb injury he sustained in the match against Australia on Sunday. The official word from the Indian camp is that Dhawan will be out for at least the next two India games, i.e against New Zealand and Pakistan on June 13 and 16.

CricketCountry has learned that Dhawan is being assessed by the Indian team’s physio Patrick Farhart and that an update will be provided later on Tuesday. The opener has gone to Leeds for further assessment. 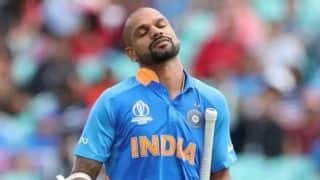