Dhawan was playing with his left thumb bandaged since the ninth over after he copped a brute of a delivery on his thumb from a Pat Cummins bouncer.

Shikhar Dhawan pushed through the pain to notch up a quality century in 95 deliveries as his 117 paved the way for India’s mammoth 352/5 against Australia in Match 14 of the ICC World Cup 2019 at the Kennington Oval in London on Sunday.

Dhawan was playing with his left thumb bandaged since the ninth over after he copped a brute of a delivery from a Pat Cummins bouncer.

The experienced left-hander, who tonked 16 boundaries during his 109-ball stay at the crease, was a little slow to get off the blocks, struggled a bit with his injury but displayed his class and ensured his form stuck on in ICC tournaments.

Dhawan failed to take the field in Australia’s run-chase and according to the BCCI management at The Oval, he will not take any further part in the rest of the action owing to his injury.

Aided by fifties from Rohit Sharma and Virat Kohli and a rapid 27-ball 48 from Hardik Pandya, India made terrific use of getting to bat first on a run-filled strip to put up their fourth-best score in a World Cup match. Australia now have to seal their highest ever World Cup chase, against an attack led by the best bowler in ODIs.

As in India’s opening match against South Africa in Southampton, Dhawan was made to look very fidgety early in the match against pace. There was nothing much in the surface, but Dhawan’s early troubles against Mitchell Starc and Cummins didn’t indicate that he was in line for a dominating century. 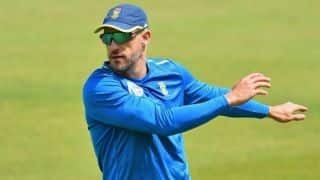 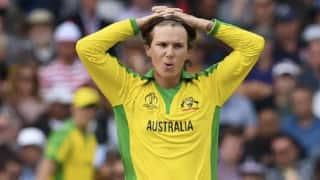