Dimuth Karunaratne's team is likely to face a penalty from the ICC for their no-show.

LONDON: The Sri Lankan cricket team runs the risk of facing a sanction from the International Cricket Council after it refused to attend the post-match press conference at Kennington Oval on Saturday.

It is customary for a representative of any team to speak to reporters before and after international matches, and when teams participate in an ICC event signs an agreement to fulfil this obligation. But after losing by 87 runs to Australia in match 20 of the ICC Cricket World Cup 2019, the Sri Lankan team did not send anyone for the press conference or the ‘mixed zone’ media interaction that follows.

An ICC spokesperson entered the space allotted for press conferences and told the gathered reporters that Sri Lanka would not be attending.

“Sri Lanka have told us they don’t want to do it. The ICC will be speaking to them,” said the ICC spokesperson.

This is an unprecedented move in an ICC event, and it comes days after Sri Lanka’s team manager Ashantha de Mel was critical of the quality of pitches, practice facilities, transport and accommodation for the squad at this World Cup.

A report in the Sri Lankan newspaper Daily News quoted de Mel as saying: “This is a World Cup where the top ten countries are taking part and I feel that all the participants should be treated equally”. The report also had de Mel complaining about one of the buses that shuttles the Sri Lankan team from hotels to grounds, and also criticising the net facilities in Cardiff and the hotel in Bristol for not having a swimming pool.

On Friday, Sri Lanka skipper Dimuth Karunaratne was asked in the pre-match press conferenced about de Mel’s comments. “I have no idea what Ashantha said. You should ask from him. I don’t know anything about it,” he had replied.

He was then asked about the quality of hotels given to the Sri Lankan team. “I have no idea about those sort of things. You should ask from the manager,” he said.

CricketCountry‘s attempts to reach de Mel for a comment on why Sri Lanka did not attend the post-match press conference on Saturday were unsuccessful. Members of the travelling Sri Lanka media were also at a loss to make contact with the team management.

The ICC website does not specify a penalty for teams who do not adhere to sending a representative for post-match press conferences, but a sanction appears on the cards. Sri Lanka have lost two matches, won one and had two washouts in Bristol. 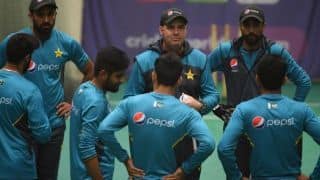