The Sarfaraz Ahmed-led side finished fifth in the points table and failed to make it to the semifinals.

1992 or 2019? Or 1992 in 2019? Pakistan s journey in the ICC Cricket World Cup 2019 ran parallel to their 1992 campaign for a while but came to an end ahead of the semifinals as the Sarfaraz Ahmed-led side was done in by the net run-rate as Kane Williamson s New Zealand pipped the Asian side.

While the end might have been a little difficult to digest for the team s fans, Pakistan s poor show in the opening game against West Indies, where they were bundled out for 105 before losing the match by seven wickets eventually worked against them.

Pakistan had their moments like only Pakistan could. While England remained the pre-tournament favourites, Pakistan beat the Eoin Morgan-led side by 14 runs in their second match. Their batting came good as they scored 348 batting first and then tamed England despite Joe Root and Jos Buttler s hundreds.

West Indies trial by pace was too hot to handle as Pakistan, playing their first match in the World Cup 2019, could only last for 130 balls, with Oshane Thomas, Jason Holder, Sheldon Cottrell and Andre Russell sharing the spoils at Trent Bridge, Nottingham. West Indies chased down the 106-run target 82 balls and the defeat eventually turned out to be the difference maker between a league-stage exit and a place in the semifinal.

While he was slammed for his below-par captaincy following the defeat against India as Pakistan suffered their seventh defeat against their Asian rivals in the World Cup, Sarfaraz led the team to victory against two of the top teams – England and New Zealand. But Sarfaraz, who had inspired Pakistan to the Champions Trophy 2017 triumph in England, failed to have encore. Like Pakistan’s performance, their skipper had an outing to forget as a captain.

Babar Azam, Pakistan s top run-getter with 474 runs, once again had his share of moments to prove why he is one of the best Pakistani batsmen going around. Mohammad Amir returned with 17 wickets -most for a Pakistan bowler in World Cup. But it was young Shaheen Shah Afridi who was Pakistan s most valuable player. The 18-year-old could scalp only three wickets in his first two games of the World Cup, the left-arm pacer added 13 wickets, including a six-wicket haul against Bangladesh, against his name in the next three games to end the tournament with 16 wickets.

Well before the tournament had kicked off, Shoaib Malik had announced this will be his last ODI World Cup. The former Pakistan skipper though had a World Cup to forget. He featured in three games and returned with the scores of 8, 0 and 0 against England, Australia and India respectively and never played a part in further games for Pakistan. Pakistan would have wanted their veteran to come good and shoulder the responsibility of the middle-order but he failed to deliver.

For Pakistan, there were far too many similarities with their 1992 World Cup campaign an early stutter, a win, then a no result, followed by two losses, followed by four successive wins. But all of it did not help them reach the knockout stage. While Pakistan managed to beat the hosts the finalists England and New Zealand, they came a cropper against India and Australia. While they won five games, their three defeats did not help their net run-rate and they failed to make it to the semifinals, ending a possible 1992-like fairy-tale.

Most runs: Babar Azam: 474 runs in 8 innings at an average of 67.71 with one hundred and three fifties 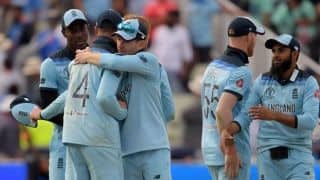