New Zealand made two changes to the team that suffered a six-wicket defeat by Pakistan at Edgbaston on Wednesday.

Australia captain Aaron Finch decided to bat first after winning the toss in an ICC Cricket World Cup 2019 match against New Zealand at Lord’s on Saturday.

A sun-drenched day and baking hot temperatures made batting first in the day/night fixture an understandable decision. “It’s a used wicket so hopefully later on it will slow up and take more spin,” said in-form opener Finch.

“I think it’s a totally different wicket to the other day. There will be something in it, first thing for both sides with the new ball.”

Reigning champions Australia, who beat New Zealand in the 2015 final in Melbourne, have already qualified for the semi-finals.

They were unchanged from the side that beat tournament hosts England by 64 runs at Lord’s on Tuesday, with Australia deciding against resting fast bowlers Mitchell Starc, Pat Cummins and Jason Behrendorff.

New Zealand, who will assure themselves of a place in the last four if they win, made two changes to the team that suffered a six-wicket defeat by Pakistan at Edgbaston on Wednesday.

“We would have had a bat. It’s a used surface on the dry side but it’s important we do the job first up,” said New Zealand captain Kane Williamson.

“We have played on so many different surfaces that pose different challenges, but today is another day.

“These are always great games and the trans-Tasman thing goes across all different codes. It’s not just a one-off, it’s one of nine (group matches) and who knows what happens after that?” 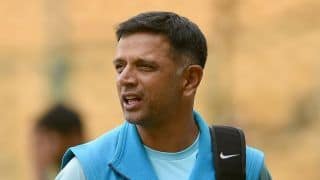 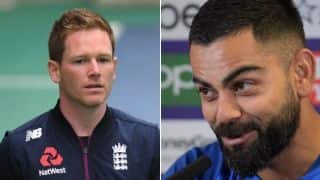