Dhoni (50) and Jadeja (77) joined hands and stitched 116 runs for the seventh wicket to keep India in the contest.

Sachin Tendulkar Wednesday led the cricketing fraternity in lauding the fighting spirit of MS Dhoni and Ravindra Jadeja in the ICC Cricket World Cup 2019 semi-final against New Zealand, but said the Indian batting can’t always rely on the famed top-order to deliver the goods.

A visibly disappointed Tendulkar said Indian batsmen made a mountain out of a mole hill during their 240-run chase. India lost the match against New Zealand by 18 runs to crash out of the World Cup.

“I am disappointed because we should have chased 240 without any doubt. It wasn’t a big total. Yes, New Zealand got off to a dream start by picking those 3 wickets upfront,” Tendulkar said.

“But I feel that we can’t be all the time relying on Rohit Sharma to give a good start or Virat Kohli to come and make sure that a solid foundation is built. Players around them also will have to take more responsibility,” the batting maestro told India Today. (ALSO READ: Kohli reacts to India’s semi-final defeat at Manchester)

After restricting New Zealand to a modest 239 for eight, the famed Indian top-order failed for the first time in the tournament as Kohli and his men were all out for 221 in 49.3 overs.

In fact, at one point of time, India were completely down and out of the game after Kiwi bowlers reduced them to 92 for six. But then, Dhoni (50) and Jadeja (77) joined hands and stitched 116 runs for the seventh wicket to keep India in the contest.

“It’s not fair all the time to expect Dhoni to come and finish the game. He has done it time and again,” Tendulkar said.

“There came a stage where New Zealand kept things simple. If you saw their fast bowlers, they didn’t try too much upfront. They just bowled in the right areas, right channels and got those wickets,” he said. I felt Kane Williamson’s captaincy was incredible.”

Former India middle-order batsman VVS Laxman said Dhoni and Jadeja were brilliant even though they couldn’t finish the job.

“Congratulations to Kane Williamson and the @BLACKCAPS for making it to a second successive World Cup Finals. Ravindra Jadeja along with Dhoni fought brilliantly and got India so close but NZ were brilliant with the new ball and that was decisive,” Laxman tweeted.

Suresh Raina feels despite being knocked out, India won millions of hearts with their performance in the World Cup. “Tough luck, boys. Well played. You’ve won hearts with your efforts throughout the tournament. Congratulations @BLACKCAPS,” he wrote. 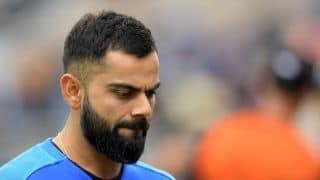