Williamson said their bowlers were successful in executing the plan of pitching the ball in the right areas.

Terming themselves as underdogs, New Zealand skipper Kane Williamson on Wednesday defended the way they batted against India in the ICC Cricket World Cup 2019 semi-final at the Old Trafford which they won by 18 runs to reach the final for the second time in a row.

In the rain-hit semi-final played over two days, New Zealand scored 239/8 in 50 overs after opting to bat. Kane Williamson (67) and Ross Taylor (74) formed the bedrock of their innings.

In reply, India lost four top order batsmen for just 24 runs inside 10 overs before Ravindra Jadeja (77) and MS Dhoni (50) shared a 116-run seventh wicket stand to raise hopes for an unlikely victory. However, it wasn’t enough in the end as India fell short by 18 runs.

The Black Caps faced a lot of flak for their slow batting and it was perceived that India would surpass the target with ease. But that was far from the truth, as the Kiwi bowlers led by Matt Henry (3/37) wreaked havoc to dash India’s hopes.

“Great semi-final over two days and we are very pleased to be on the right side of it,” Williamson said at the post-match presentation ceremony. (ALSO READ: ‘Unfair to expect Dhoni to finish the game all the time’)

“It was really tough and we had to assess the conditions. Both teams thought it would be a high-scoring match…But we thought if we could get to 240, we could put India under pressure,” he added.

Acknowledging that the stand between Jadeja and Dhoni could have taken the game away from them, Williamson said their bowlers were successful in executing the plan of pitching the ball in the right areas.

“Lot of contributions from everyone. A lot of it was on the conditions and the rain around. We just wanted to put the ball in the good areas and put pressure on India. We just wanted some early wickets and it was a great start for the bowlers. We needed to stay in the game for long periods. The way Jadeja and Dhoni were hitting the ball, they were likely to win, but our fielders were outstanding,” he said.

New Zealand made the semi-final by the skin of their teeth, finishing fourth after losing three games on the trot and bettering fifth-placed Pakistan only on net run rate. (ALSO READ: Kohli reacts to India’s semi-final defeat)

“Yeah, it’s a different feeling the way we had to skin it through the round-robin stage. Some of those games were tough and the conditions also varied. We were underdogs coming into the semis, but anything can happen on any given day. It was nice to see the guys fight for two days,” Williamson concluded.

In the 2015 World Cup, Australia had defeated New Zealand by seven wickets in the final played at the Melbourne Cricket Ground. 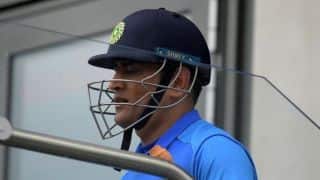