Legendary Clive Lloyd has backed West Indies to do well in the ongoing ICC Cricket World Cup saying they can match any participating team.

I thought the West Indies were quite clinical against Pakistan. They used the pitch to their advantage in the sense that it had a bit of life and they put pressure on Pakistan. They didn t handle it too well and overall it was a very good first game for the West Indies. They now have to keep things going and should be looking now to try and qualify.

Once they do that any team can win it, but it was a very good effort first up and I was proud to see them really perform – not that I didn t expect them to do well.

I think Pakistan have previously given us problems so it was a very admirably performance and I can only wish Jason Holder and the rest of the boys well for the rest of the tournament. I m sure they will upset a few of the big boys if they play like that. This game has proven that we have some firepower and that means we can match anybody in this competition.

We have to try and test out our batting now, that s the real test going forward. We have to see how they do when they have to bat first and try and post a good total.

I want to see how we get on if we have to defend a total, but it s shaping up really well at the moment and they couldn t have asked for a better start to the tournament.

Admittedly, Pakistan were not at their best but I think that was more to with the West Indies pressure as that was a good tactic. Holder bowled them in short spells and managed them well.

Oshane Thomas got four wickets and he was quite aggressive. I think the pressure he brought to bear paid off and he looked very good even though he didn t have the new ball.

We just need to see what happens when the pressure is on the West Indies, but the game against Australia should do that as that will be a good test of where we are at.

Australia have got some firepower and some very good batsmen, so that should be an excellent game. That will give you an idea if West Indies can qualify or not.

It s going to be a good test and I also want to see the game against England, that too is going to be quite the contest. England have some real firepower and variety too.

The next week or so is going to be very exciting for this competition. From what I ve seen so far, though, I think the West Indies do possess enough to qualify for the last four.

This result will give them a lot of confidence and I m sure that is their aim to do well against the top boys and the teams above them in the rankings.

I am positive that they can qualify and if they do, they can go all the way really. It s not just the bowling, we have good batters too and we can bat pretty deep.

We showed that against Pakistan as it was a good effort all around. It was good to see the batters knock off the runs, so they will be feeling very good going into a big game against Australia. 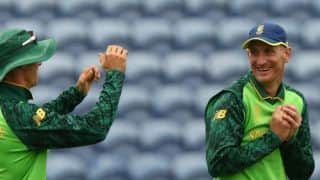