The team now travels to Taunton to play defending champions Australia on Wednesday.

BRISTOL: A washout against Sri Lanka at Bristol’s County Ground on Friday has not deterred the Pakistan cricket team from aiming at getting back to winning ways in the ICC Cricket World Cup, their captain Sarfaraz Ahmed says.

After losing to West Indies and then beating England, Pakistan arrived in Bristol to overcast skies and the forecast of rain all through Friday. As it turned out, the match never got going with early morning rain not letting up until it was too late.

This washout gives Pakistan and Sri Lanka one point each. It is the second time in World Cups held in England, dating back to 1975, that a match has been called off without a ball bowled.

For Sarfaraz, one point is not ideal but the Pakistan team, he said, was ready to get cracking.

“As a team we really wanted to play this match especially after gaining momentum with the win against England,” he said. “It is unfortunate that we were not able to play. We have great team spirit and our confidence is on a high after beating England. We would want to carry the momentum into the remaining games. We won t relax in our remaining six matches.”

After the match was called off at 3:45pm local time, Pakistan had a gym session at the venue.

The next will next travel to Taunton to play defending champions Australia on Wednesday.

“Like other teams in the tournament, Australia are also a tough opponent,” said Sarfaraz. “They also have momentum as they have won their first two matches. We have a few days now to prepare for the match and we will try to prepare at our best to enter the field as well as we can.” 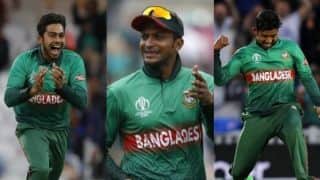 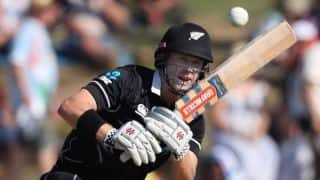