Cricket South Africa plunged into turmoil after its acting president AK Khan and the chairman of the Audit and Risk Committee John Blair stepped down from their posts in the wake of a damning inquiry report of financial mismanagement in CSA. 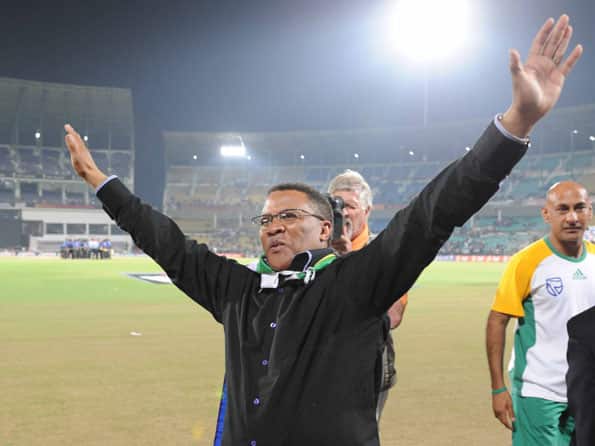 The internal CSA inquiry was chaired by its acting president AK Khan, who also came under fire for heading a committee that was just trying to protect CSA CEO Gerald Majola Getty Images

Cricket South Africa plunged into turmoil after its acting president AK Khan and the chairman of the Audit and Risk Committee John Blair stepped down from their posts in the wake of a damning inquiry report of financial mismanagement in CSA.

The resignation of the two top board members did not come as a surprise as pressure is growing across the country for the entire board of CSA to step down.

The Nicholson inquiry, instituted by Sports Minister Fikile Mbalula, after three months of hearings concluded that CSA CEO Gerald Majola should be suspended and investigated for possible criminal charges by the National Prosecuting Authority for breaching his fiduciary duties.

Mbalula set up the inquiry after nearly two years of wrangling within CSA over huge IPL bonuses that Majola paid himself and other senior CSA staff without the knowledge of the board.

IPL’s second edition was played in South Africa due to concerns over security during elections in India at that time.

CSA President Mtutuzeli Nyoka was twice ousted in absentia after he called for an independent inquiry into the bonus issue. But the CSA opted for an internal inquiry which largely cleared Majola.

Khan took over as Acting President when Nyoka was first ousted in February 2011 until he was reinstated following court action, and again from October 2011 to date after Nyoka decided not to challenge his second ousting.

The internal CSA inquiry was chaired by Khan, who also came under fire from Nicholson for heading a committee that was just trying to protect Majola.

“The fact has to be faced that we have not been able to resolve the problem that has bedevilled our cricket for the past two years and I believe the time has come for fresh leadership to take the game forward,” Khan said in a statement after a CSA meeting on Wednesday night.

“I am not and have never been a career cricket administrator and I will thus be retiring from the administration of the professional game altogether.

“I would like to apologise to our fans and the country for the fact that this matter remains unresolved at the current time and I wish the future leadership of CSA all of the best.”

Blair also stated that he felt the time had come for him to move on in the best interests of cricket. Insiders said more resignations are expected to follow.

CSA CEO Gerald Majola has indicated that he will not be making any public statement until he has met the Board of Directors of CSA on Saturday but yesterday afternoon Dennis Cruywagen, who calls himself a close associate of the CEO, said in a statement released to media that Majola suspected “he was a victim of a hatchet job”.

“Majola has been hurt and angered by judge Nicholson’s imputation that there had been criminal intent on his part.

Judge Nicholson gave no evidence to back this up,” Cruywagen said.

The heads of almost all 11 provincial franchises are expected to call for Majola’s head at the meeting on Saturday, although his lawyers have found fault with Nicholson’s report already, according to Cruywagen.

Mbalula is expected to announce his plans for acting on the report next week after consultation with the Presidency. (PTI)

Can T20 Football achieve its goal in cricket-crazy India?