Tied on points with Kings XI Punjab (KXIP), Chennai are second on the table due to a slightly lower net run-rate. Chennai have won seven of their nine games and are aiming for their third title. Rajasthan are not too far behind, occupying the third spot with six wins from nine matches. Given their fine run, both the teams would start as equals in the match even though it was Chennai who came out trumps the first time the two sides came face to face in this season. Catch Live Scorecard and the ball by ball commentary of the IPL 2014 match between Chennai Super Kings and Rajasthan Royals here.

The likes of Ajinkya Rahane, Steven Smith and Sanju Samson have also been coming good, making Rajasthan a reasonbaly strong line-up to deal with for any opposition attack. Skipper Shane Watson is, however, due to make a big impact in the tournament even though he has been producing fine cameos. On the other hand, Chennai are not any less when it comes to batting with an array of power-hitters such as Dwayne Smith, Brendon McCullum, Faf du Plessis besides skipper Mahendra Singh Dhoni. All these batsmen have been in fine form and it would take some effort by Rajasthan bowlers to contain them. 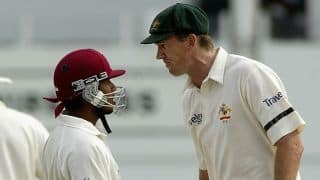