Dale Steyn announces himself fit for T20I series against Australia

Dale Steyn announces himself fit for T20I series against Australia

South African fast bowler Dale Steyn announced that he is fit and ready to play in the three match T20I series against Australia.

South African fast bowler Dale Steyn made a successful return to cricket playing for the Western Province Cricket Club on Saturday. Steyn, 32, announced  that he is fully fit and has recovered from the shoulder injury is ready to participate in the Twenty20 (T20) International series against Australia. Steyn had missed most of the Test, One-Day International (ODI) and T20I series against England last month. South Africa are to play Australia in a three match T20I series from March 4th with the first match at Durban. Second match on March 6th will take place at Johannesburg, with the final match on March 9th being taking place in Cape Town. VIDEO: ICC World T20 2016: Cricket South Africa’s innovative campaign goes viral

Steyn was quoted by ESPNcricinfo who just before his return had said,” I will be fine to play against Australia”. He futher went on to add, “All the talk about the injury can take a sideline – I’ve been fine for the last three weeks, and that’s why I’m playing today. If I was injured, I wouldn’t be playing today. So, ready to take on the Aussies and everything should be fine.”

Steyn in his return game had figures of 3 for 2 in just five over against St.Augustine’s in the first innings and had figures of 2 for 11 from 5 the second time around.  Steyn had been trouble with injury from the past many months missing as many as six of the last eight Tests that South Africa have played. South Africa after the Australia seen will depart for the ICC World T20 2016 and play their first match on March 18th against England at Wankhede Stadium, Mumbai. 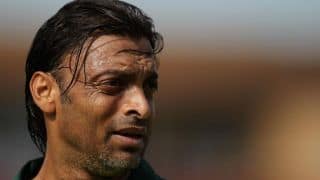