South African speedster Dale Steyn picked up his 300th Test scalp as he cleaned up Doug Bracewell on the first Day of the first Test against New Zealand at Cape Town. 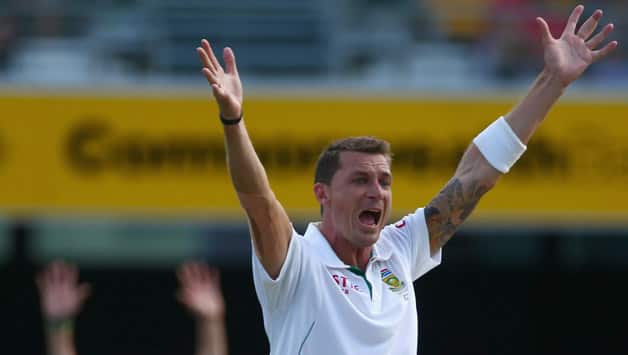 South African speedster Dale Steyn on Wednesday, picked up his 300th Test scalp as he cleaned up Doug Bracewell on the first Day of the first Test against New Zealand at Cape Town.

He has achieved this record in just 61 Tests, fastest by a South African bowler, beating legendary Allan Donald who took 63 Tests for his record.

Steyn has been in phenomenal form in the recent past and has been instrumental in South Africa’s rise to the pinnacle in Test rankings.

Having made his debut against England in Port Elizabeth in 2004, he spearheads the best bowling attack in the world today. Steyn has been devastating with the ball in 2012, picking up 39 wickets in nine Tests and rising to the top spot of the ICC Test rankings with 880 points.

“He’s our go-to guy. He’s got there really quickly. He always seems to make an impact for us. He’s the type of guy as a captain he’s an asset to have. You can throw him the ball and you know he’ll make a play for you somewhere during the Test match. When he gets that bit between his teeth you really start to see things happening,” Smith added.

His 300 wickets have come in 61 Tests at an average of 23.79. The man from Phalaborwa has taken as many as 18 five-wicket hauls on his way to this achievement.