Fast bowler, Dale Steyn has returned to the top spot in ICC’s Test bowler rankings after he delivered a match-winning performance in the second Test against New Zealand at Centurion. Steyn, took his 26th five-wicket haul in New Zealand’s second innings as his figures read 5 for 33. He also went past Wasim Akram’s Test wicket tally of 414. He took eight wickets in the Test. He has now jumped two places and climb over Ravichandran Ashwin and James Anderson. Earlier, after reaching the top-spot in February 2014, Styen was bogged down by a shoulder injury in a Test against England in 2015. Ashwin had finished the last year as the top-ranked bowler, after backing up with his performances. READ: SA vs NZ: Steyn goes past Akram’s Test wicket tally of 414

Meanwhile, Steyn’s team-mates, Kagiso Rabada and Vernon Philander too have made a decent progress as far as the rankings are concerned. While Rabada has jumped three places to reach the 27th spot, Philander has moved from 13th to 11th. New Zealand’s fast bowler Neil Wagner too, after a five-wicket haul in the second Test has reached the ninth position.

Meanwhile, South Africa have moved to the No.5 spot in the ICC Team rankings. Talking to espncricinfo.com, Steyn said, “This bowling unit is at a stage where everyone can rely on everybody – you don’t have to rely on me. Look at KG [Kagiso Rabada], he took 13 wickets here last time [against England]. It’s now about the culture in the side. You can step in and perform. It’s not aimed at one player to mentor anyone.”

He also spoke about his own career. “I just want to play. I don’t know if I will wake up in a month and can’t do it anymore or if I will wake up in four years and can’t do it anymore. I just really enjoy playing Test cricket. I love it. It’s what I feel I have been put on earth to do. I do not know when to pull the plug or when the time to make that decision will come but if I am still making batters jump around and the pace is there, I will carry on doing what I am doing. 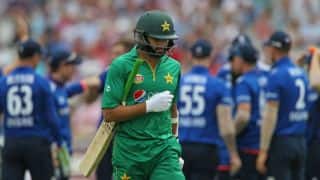