Dale Steyn on Day Four of the second Test produced an excellent spell of swing bowling against New Zealand. Steyn picked up Tom Latham’s wicket of the very first ball of the first over. Latham tried to leave the ball, but the extra bounce off the pitch, richocheted off his bat and hit the stumps. Steyn then removed Martin Guptill off the last ball of the same over. Guptill edged a slightly short of length, almost good length delivery, to Hashim Amla at slip. Both openers were out for duck. Steyn then removed Ross Taylor, when the ball stayed low to hit his pads. Steyn overtook Wasim Akram’s Test wicket tally of 414 when he bowled Mitchell Santner in the final session of the day. New Zealand were 118 for 6 then. FULL CRICKET SCORECARD: South Africa vs New Zealand, 2nd Test at Centurion

Steyn bowled with a beautiful seam position as he terrorised batsmen while sticking to a superb line and length. He bowled the odd short ball and bouncers as well. Santner’s catch to slip was dropped by Hashim Amla, but he rooted Santner’s stumps in the very same over. It was Steyn’s fourth wicket of the innings.

Steyn came back from a 8-month frustrating injury period to play in the first Test at Durban, took two wickets there but a drizzle on Day Two and then a thunderstorm to follow led to a wet outfield and Steyn could not bowl again in the Test, which ended in a draw.

Meanwhile, South Africa added 27 runs in 13 overs, for the loss of Philander’s wicket, before declaring their second innings on 132 for seven. Temba Bavuma made 40 not out. Tim Southee bowled Philander and finished with three for 46. 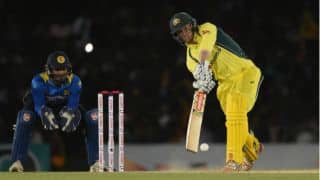 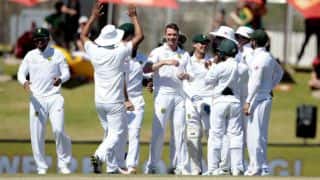