Dane Piedt picked up the crucial wickets of Ben Stokes and James Taylor as England get a much needed lead past 150.

South Africa continued their bowling dominance in the post lunch session as well. Dane Piedt who had picked just one wicket before lunch came out with much more confidence. Piedt second strike was dangerous Ben Stokes, who had scored a blistering 258 in the first inning. In an attempt to hit Piedt for a consecutive boundary he ended up giving a catch to Morne Morkel situated in the deep. Stoke went for a 34 ball 26. Piedt stuck again as James Taylor managed to find a very faint edge and lob the ball to Temba Bavuma in short-leg. Taylor’s resistance lasted 84 balls making 27 runs. England going into tea are saved up Jonny Bairstow 26* and Moeen Ali 10* taking the lead to 157 with England score being at 155 for 6. LIVE CRICKET SCORECARD: South Africa vs England 2015-16, 2nd Test at Cape Town, Day 5

Bairstow and Moeen have now added 39* runs for the seventh wicket. Baristow was lucky to survive a close call who was stumped by Quiton de Kock just managed to bring his boot inside the crease. England in the first session got off to worst possible start losing wicket after wicket. Alastair Cook losing his wicket in the very second over of the day to Kagiso Rabada. Cook in an attempt to flick gave a catch to Quinton de Kock. Next to go was Alex Hales in the very next over trying to drive gave a brilliant catch to a leaping Chris Morris in the slips. Alex Hales did not add any run to his overnight score. Live Cricket Score, South Africa vs England 2015-16, 2nd Test, Day 5 at Cape Town

Third played to be dismissed in the morning was Joe Root who had earlier survived a catch in the slips off Morne Morkel citing a no-ball. Morris into his first over of the day cleaned up Root with an incoming delivery hitting uprooting the stumps 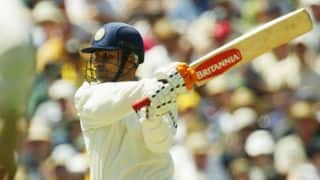