Joe Denly also batted attractively in making a brisk 22 before he was bowled middle stump by first change Peter Siddle.

Canterbury: Daniel Bell-Drummond made a fine fifty after Australia left Kent with a mountain to climb on the final day of their four-day Ashes tour-opening match at Canterbury on Sunday. READ: Ryan Harris claims he is fit for Ashes 2015

At lunch, Kent were 118 for three in their second innings, needing a further 432 runs to reach their improbable victory target of 550 after Australia declared on their overnight 322 for four. READ: Mitchell Marsh’s ton puts Australia in driver’s seat against Kent in pre-Ashes warm-up tie

Bell-Drummond, dismissed for a duck in the first innings, was 66 not out and Ben Harmison unbeaten on two. The 21-year-old Bell-Drummond, regarded as one of the most promising young players in England, looked in good touch after opening the innings, striking three fours in over from Ryan Harris including a fine straight drive.

But Key could only manage 14 on Sunday before, for the second time in the match, he fell to Fawad Ahmed with Mitchell Johnson holding a good catch off the leg-spinner at wide mid-on. Bell-Drummond went to fifty in just 56 balls, including nine fours.

Mitchell Marsh, who made a quickfire century in Australia’s second innings, continued to press his claim as a seam-bowling all-rounder in the side for the first Ashes Test at Cardiff on July 8, by having Kent captain Sam Northeast caught behind for 11. READ: Mitchell Johnson helps Australians take huge 1st innings lead vs Kent 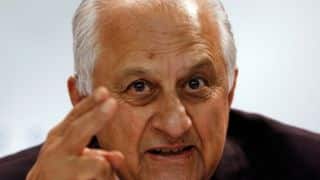 Azhar Ali is integral for Pakistan at present and future